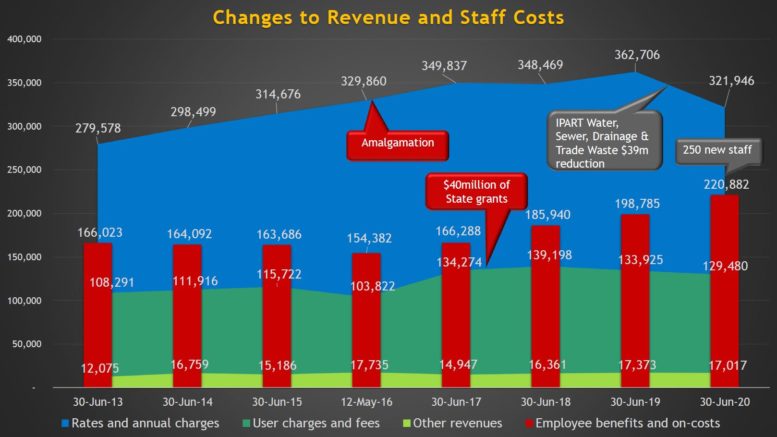 The story behind Central Coast Council’s financial crisis is “quite simple”, according to Acting CEO, Rik Hart.

In his second exclusive video interview with Coast Community News, Hart outlined the root cause of the problem; taking viewers through the financial situation from the time of the Council amalgamation in 2016 to the present, using graphs to illustrate his points.

“When Administrator, Dick Persson, and I arrived in October last year, we had to look at how we found the organisation at that time, but we also had to go back and look at what has happened since amalgamation,” Hart said.

“I must make it clear that there is no evidence of corruption, it was simply a case of the organisation taking its eye off the ball.

“At the time of amalgamation, it looked on paper as though the organisation had a lot of working capital, but in reality it didn’t.”

Hart said an audited financial statement showed a working capital balance of around $93M as at June 30, 2017, which indicated a very healthy balance.

“But we suspect $88M of that was actually restricted water and sewage funds and the real balance of unrestricted cash was more like $5M,” he said.

From this starting point, the Council managed to achieve a surplus of $64M in that first year, due to reduced staffing levels at Gosford Council at the time of merger and various State and Federal funding grants for things such as infrastructure and IT upgrades, but the bottom line has steadily decreased each year since, leading to an estimate last November of a $115M deficit during the current financial year.

“The Council recorded three successive years of losses, and up to November last year, it was funding this by drawing from internally and externally restricted funds,” Hart said.

“I don’t know how the organisation thought it was funding an extra $70M on capital expenditure, increasing staff numbers and having to spend extra money on bushfires and COVID.

“Most people in their home life know how much money is coming in and how to adjust their outgoings to compensate, but the organisation didn’t do that and ended up running out of usable cash or working capital.”

Hart said Council could easily have curtailed expenditure during the three years.

And now, he said, the time had come to closely examine how Council can claw its way back from the abyss.

The first step was to reduce capital expenditure/depreciation to $170M and the materials and contracts expenditure line by $20M.

The next step is staff reductions.

At the time of merger, staffing levels were all over the place, Hart said.

Amalgamation should have seen staff numbers reduced, but instead staffing levels have steadily risen, and not enough attention had been paid to rationalising Council amenities.

Hart cited as an example the fact that the region still has seven depots and questioned if that was the optimal operating structure for the new Council.

“Pre-merger, Gosford Council had been reducing staff numbers, primarily by not replacing staff as they left,” he said.

“It’s hard to know if they had the right staff numbers for the services they were trying to deliver at the time.”

“It seems that the merged Council over compensated by escalating staffing numbers dramatically in the ensuing years, and now those levels need to be brought down to a pre-merger combined number,” Hart said.

“We have now come up with a budget acceptable to the banks which has a target salary line of $175M and discussions are proceeding well with the unions in a positive way to achieve that,” he said.

“Post Easter, we will see staff exiting the organisation in line with that target salary line, following 28 days consultation to ensure compliance with the award.

“At the end of that process, we will have set the playing field from a financial point of view and then it is up to a future Council to decide just how that staffing expenditure will be allocated to services.”

Hart said downsizing had already commenced with voluntary redundancies, specifically in the corporate section, which has taken the largest hit.

Regarding the projected 15 per cent rate rise still under consideration by IPART, Hart said Council had “chosen to go with the maximum that people would be prepared to consider” and if approved, it would be combined with a reduced level of service.

“There is also a small amount of income from things such as investments and asset sales,” he said.

Hart said Council was the recipient of quite a large number of State and Federal Government grants, with Member for Terrigal, Adam Crouch, being particularly pro-active in securing funding, but this could be a two-edged sword.

“These grants pay for an asset to go on the ground and then we have to depreciate it, usually around 2 per cent per annum, and fund operational, staffing, repair and maintenance costs,” he said.

“So you end up with free assets, but increased costs to look after those assets.”

With Council’s deficit for this financial year estimated in November 2020 to be around $115M, Hart said that deficit projection had already diminished to $107M at December 2020, and would continue to do so for the balance of the year.

It is important that Council makes surpluses from the next year onwards in order to ensure that unlawfully used funds in internal and external restricted reserves are repaid over the next 10 years, he said.

“Every year that debt is coming down,” he said.

“During a year, the monthly debt number might go up and down as expenditure/income changes, but most of Council’s $200M internal debt (internal and external restricted reserve) should be eliminated within 10 years.”

The remaining $365M of “bank debt” will slowly reduce as principal and interest are paid back each year according to the loan terms, he said.

Hart said that if Local Government Minister, Shelley Hancock, decides to return councillors to their roles once the period of administration ends at the end of April, she will likely appoint a Financial Controller to ensure that expenditure is in line with budget until the local government election on September 4.

If she opts for a public inquiry rather than returning councillors, Central Coast electors will not go to the polls to elect a new council until 2024, he said.

See the full video, including explanatory graphs at https://www.facebook.com/coastcommunitynews/videos/3773480069401214