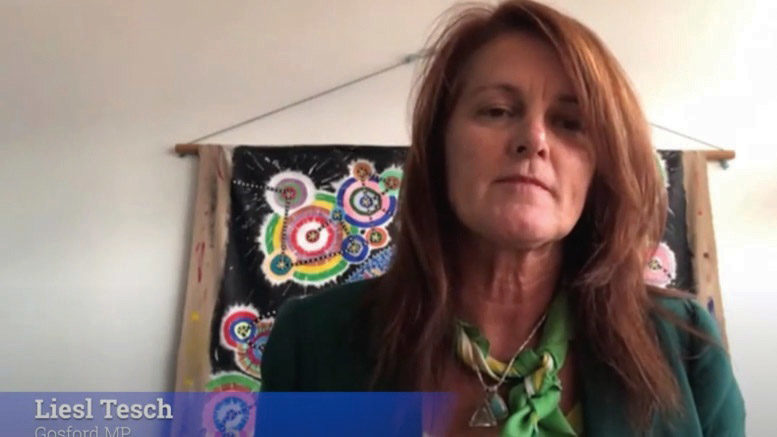 Member for Gosford, Liesl Tesch, has opened up about her personal experience with domestic violence as NSW Parliament debates new regulations following a string of bad statistics for the Central Coast.

The Crimes (Domestic and Personal Violence) Amendment (Coercive Control-Preethi’s Law) Bill 2020, sparked by the murder of Preethi Reddy by her former partner, is currently before NSW Parliament.

The Bill is aimed at kerbing coercive control which refers to abusive behaviours against a person over a period of time to establish and maintain dominance and assert control over every aspect of their lives.

Tesch recalled her own mother’s struggle with domestic violence and coercive control.

“Growing up we all walked on egg shells around my father because one wrong move would make him crack,” she said.

“It broke my heart having to watch my mum live under my father’s control, with her every move being monitored and scrutinised.

“There were no protections in place for our beautiful Mum as she did her best to live her life as a shift-worker and a community member.

“I wanted to put my mother’s story on record because coercive control is something that is experienced by so many women and their children throughout our community.”

Tesch said in 2019, the Central Coast was given the frightening title of first in the state for domestic violence rates.

Additionally, the Australian Bureau of Statistics Personal Safety Survey found 1 in 4 women experience some sort of physical violence and Women’s Safety NSW estimates this number is even higher when it comes to women experiencing coercive control, she said.

“We know all too well that current laws addressing domestic violence do not adequately protect those suffering at the hands of their partner and often … the issue is discovered too late,” she said.

“On the Central Coast in 2017, Blair Dalton was murdered by her former partner and it broke her family, her friends, our emergency services and our community as a whole.”

Tesch said with International Women’s Day having been celebrated on March 8, now is the perfect time to discuss how we can empower women and police to address the endemic domestic violence in our society.

“There’s a long way to go with domestic violence legislation and protection and this is one move in the right direction,” she said.

“I will continue to fight for legislation that will protect the lives and the dignity of women.

“In Parliament I implored all the women to vote in favour of the legislation and protect women today and into the future.

“It is imperative as a collective we pull together to support victims of domestic violence and survivors allowing for prosecution for non-physically violent crimes against partners.”

If you are impacted or need support, please call the Domestic Violence Helpline on 1800 656 463.

Courthouses to be upgraded