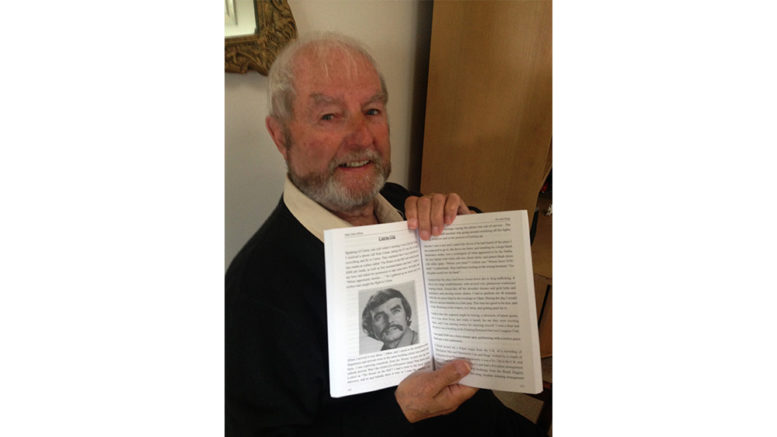 Chris Dillon with his self-published book, Art and Song by JC Dillon

Writing a book can be challenging but Kincumber resident, Chris Dillon, believes the writing is the easiest part.

Following a bad experience when publishing his book professionally, the 87-year-old is now encouraging others to do it themselves.

Last year, Dillon decided to sit down and write his memoir, Art and Song by JC Dillon, and get it published by Amazon in April.

He said his experience was a hassle, and since the book has been on the website, sales have not been high.

“Publishers today are only interested in your money and give no credence to the merit of your story,” Dillon said.

“I was informed by a sales-person of a large publishing company that if you are a celebrity or a well-known writer, your book will be given top priority, even if it is rubbish.

“They may even pay you a lump sum in advance.

“If you are a nobody, just pay up.

“Yes we will produce a book to your approval and make it available on demand.”

“The book is not worth that price,” he said.

Dillon’s solution is to show others how to publish a book by themselves.

“If you intend to write a fictional story (eg a crime thriller), then you will need the expertise of a publisher,” Dillon said.

“Be prepared to pay a few thousand dollars for formatting, illustrating, artist fees for a cover, and advertising.

“If you want to produce a biography or memoirs with no intention of selling, perhaps for your grandchildren, then I would recommend many hours of intense preparation on the computer.

“It may cause you some headaches and frustration, but the final outcome will bring a sense of euphoric achievement.”

Dillon suggests formatting photos, editing your script yourself, and producing a hard binder book through Officeworks.

“They have black, blue and maroon, and you can also have your title in embossed gold lettering,” he said.

“They will also produce multiple copies, and they do a professional job.

Dillon said he decided to share his experience after hearing others had dealt with similar problems.

“I think they can do it themselves without (such) expense.”

Shipbuilders heritage walk is on again