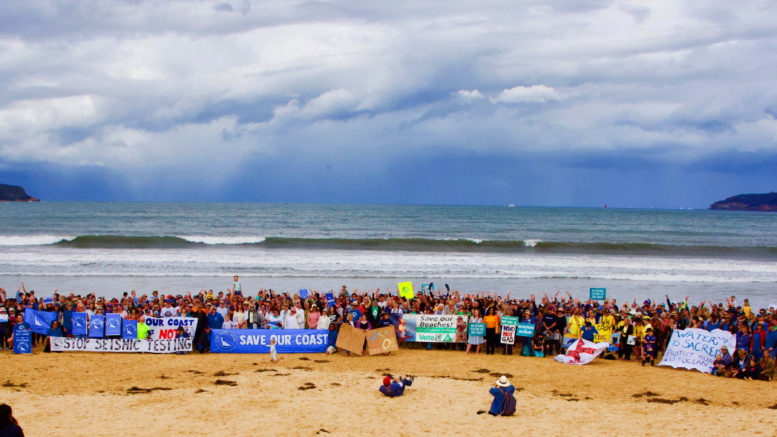 In a win for people power, the Prime Minister, Scott Morrison, has officially voiced an emphatic “no” to an extension of the Petroleum Exploration Permit 11 (PEP11) for offshore oil and gas drilling.

PEP11, a joint venture between Advent Energy and Bounty Oil and Gas, covers 4,500sqm of ocean from Newcastle through the Central Coast to Manly, with one of the target areas, the Baleen Prospect, just off Lake Munmorah.

After three years of campaigning, environmental not-for-profit group, Save Our Coast, strongly welcomes the Prime Minister’s support to end the “ecologically disastrous project” and calls on the Minister for Resources, Keith Pitt, to cancel the permit once and for all.

The decision on whether to extend the PEP11 permit, which was due for renewal on February 12, now rests with the Minister.

In a statement to Central Coast Newspapers on Friday, March 5, the Minister said that the decision “definitely won’t be this week”.

Save Our Coast Founder, Dr Natasha Deen, said the Prime Minister’s March 4 announcement of opposition to PEP11 was a testament to the strong community support of the campaign to end the flawed and devastating plan to drill and blast for fossil fuels off this coastline, putting at risk the coastal ecosystem, marine animals, climate and way of life.

“I am proud and humbled to have started this campaign to Save Our Coast and to see the momentum it has achieved, with a diverse chorus of 78,000 voices united in strong support of our three-year campaign, and delighted to have received historic bipartisan political support in our campaign to stop PEP11, including this incredible support from the Prime Minister,” Dr Deen said.

“However, we hope the Prime Minister ensures that his colleague, and decision maker, Keith Pitt, heeds the clear wishes of the community, his NSW counterpart, John Barilaro, and now the Prime Minister himself, and refuses to extend the permit.

“The community expects more than words and we won’t stop until this flawed and risky plan has been officially cancelled and our beautiful coast saved,” Dr Deen said.

Every local Federal Member, both Labor and Liberal, with an electorate that will be impacted by PEP11, has taken a stance against offshore oil and gas drilling off their beaches.

Federal Liberal Member for Robertson, Lucy Wicks, was slow to the cause but finally came out on February 5 to say that she would oppose the permit extension.

“Today, the Prime Minister has explained that saying no to the extension of PEP11 is the right decision and I couldn’t agree with him more,” Wicks said in a statement on Thursday, March 4.

“The Prime Minister has listened to the concerns of the Central Coast community and stands with us in saying no to extending the PEP11 permit,” she said.

However, Labor Leader, Anthony Albanese, and local Federal Members, Emma McBride for Dobell and Pat Conroy for Shortland, say that their position has always been crystal clear.

“Under the company’s proposal, thousands of local jobs in tourism, hospitality, recreational and commercial fishing would be jeopardised,” a joint Labor statement said.

“Labor has been consulting with Save Our Coast, Surfrider Foundation, other advocacy groups and the broader community, and we congratulate them on their fierce advocacy in protecting their region.

“We support new energy and resources projects where they make sense, but this was always a dumb idea.

“A broad spectrum of people across the community knew it, it’s just a shame that it took Scott Morrison so long to realise it.

“Rest assured, the whole Labor team will not rest until this bad idea is 100 percent dead and buried.

“With his Prime Minister now joining the ranks of those against the application, is Keith Pitt still ‘concerned about some of the exaggerated claims being made by groups who are opposed to the permit’?

“Either Keith Pitt is wrong or the Prime Minister is,” the Labor statement said.