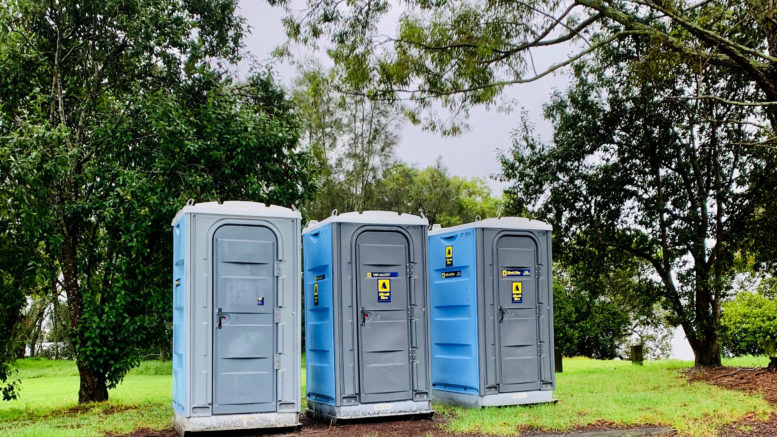 Portaloos made a reappearance at Davistown following torrential rain from March 18-23 as the area’s drainage and sewerage systems once again failed to cope.

The emergency measure was a repeat of an event in February last year which saw Portaloos distributed around the area by Central Coast Council following a similar storm event.

But this time the move had been thought through well in advance, with Davistown Progress Association President, Jenny McCulla, praising Council for taking early action.

“Portaloos were brought on site by Council from March 19 as many toilet systems broke down following heavy rains the night before,” McCulla said.

“Council was very proactive planning up front in case the service was required.

“Toilets at the Progress Hall went out on March 21 and Council fixed them so early yoga classes and regular meetings at the hall could continue.

“But there were issues at Kincumber Cres and other locations in the area.”

McCulla said issues experienced in the area during heavy rains had a two-fold cause; a failing sewerage system and drainage maintenance issues, with pipes inundated with stormwater feeding into the sewerage system.

“The system is 23 years old and more regular maintenance is needed,” she said.

The two issues are handled by different Council departments and some cohesion is needed.

“We are now at a stage where a lot of the valves need replacement.

“Some areas are worse than others.

“It appears those areas furthest from the main plumping station in Restella Ave have more issues than those closer; although Malinya Rd is not far from the station and had back-up issues on March 18.”

“This is an ongoing problem and we have been encouraging residents over the past 18 months or so to continue to report blocked drains,” McCulla said.

“There is a real need to clear these drains.

“Many streets again experienced problems with the heavy rain.

“Some people, who have funded clearing drains and pipes themselves, sometimes costing around $8000, were having no problems.

“But there is a changing dynamic in the population at Davistown and many elderly residents and young families can’t afford to pay for this sort of work.”

“Council is preparing a sewerage maintenance plan at Davistown following our calls for a total review of the system (which they have completed).

“The system is over 20 years old and now requires a lot of maintenance.

“Council’s plan will list numbers of required upgrades and a budgeted plan to address the needs over a few years, with immediate maintenance in the worst locations.

“But there is flooding due to blocked drainage that needs attention.”

A Council spokesperson said Council had closely monitored Davistown 24/7 during the severe weather period, with crews onsite to ensure the sewer system and service was maintained.