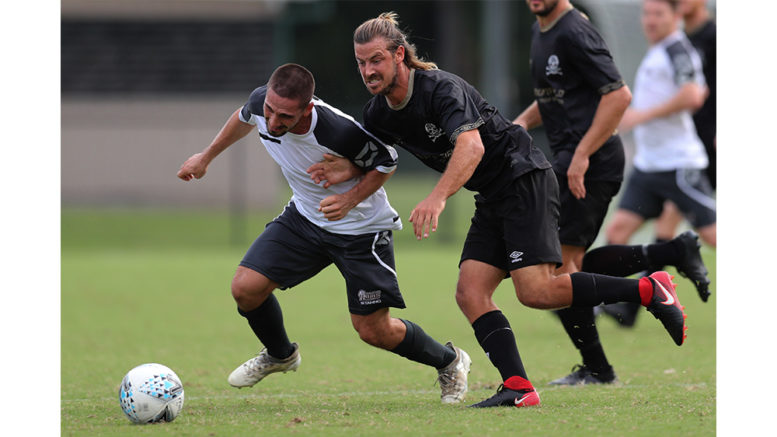 Adam Woodbine (in black) from a previous game

Central Coast United have advanced through to Round Four of the Football Federation Australia (FFA) Cup after defeating Scots FC Lions on Tuesday evening, March 23.

The 6-2 win away at Ador Avenue Reserve, Rockdale, was cemented thanks to a hat-trick by Adam Woodbine, although the match went to half time with the scores closer at 3-2.

The initial goal came for the Pirates through Woodbine in the fifth minute, who controlled a midfield cross on his chest to then drive the ball home off the inside post.

However, a quick hit back from the Lions came only a minute later from a counter-attacking through ball that drew the Pirates’ keeper away from his goal and ended in an easy pass into the net.

Two goals from corners, first to the Pirates, again through Woodbine, then to the Lions, restored the equilibrium.

In the 32nd minute, the lead was returned once again to the Pirates after a challenge by the Lions keeper ended in a penalty rewarded against him.

Daniel Mcfarlane stepped up to do the work and slid the ball into the bottom corner.

The score remained as it was for the first 10 minutes of the second half, until Woodbine fed Corey Atkinson across the keeper for an easy touch into goal.

The fifth goal came in the 71st minute and completed Woodbine’s hat-trick after his clever run into the box to outmanoeuvre the Lions’ defensive line.

The final goal came again off a corner for Scott Mcginley after the initial save ricocheted the ball into his path.

In the eyes of Matt Crowell, United’s General Manager and team player currently out due to an injury, the game had tight moments, but his team always looked the better side despite a few errors in the back that led to conceding goals.

“When we were on top, we had a lot of the ball and we created a lot of chances, but then we let them back in the game with a few mistakes,” said Crowell.

“The FFA Cup involved clubs from different division playing against each other, so all in all it was a credit to the Lions for coming out and giving the game everything.

“For us, it is important to have a good cup run, not just for the club but for the players.

“It was pleasing result although it was just one game, so in Round Four we will have to go again.”

Crowell also commented on the dominant performance of Woodbine who returned for this contest after missing preseason games.

“Adam’s one of our senior key players and a valued member of the squad.

“His goals were proper poacher goals where he was in the right place at the right time to score, so we’re really pleased he was able to play the full 90 minutes for us and we know he’s going to be an important player throughout the year.”

Overall, Crowell noted that this year, the team’s main focus is performing at the top level in the National Premier Leagues NSW 3 competition.

Currently, after two matches this season, the Pirates sit at the top of the table undefeated, in third place due to goal difference.

“In general, the team played well, although everyone knows we can play better.

“There’s a lot to play for ahead of the 2022 season so we always have one eye on that.”

The Pirates are still awaiting confirmation on details of their Round Four match, with a draw to be announced around one week before the match that will likely be between April 13 – 15.

Whoever the team face up against, the players will seek to maintain their strong start in competitive football this season.