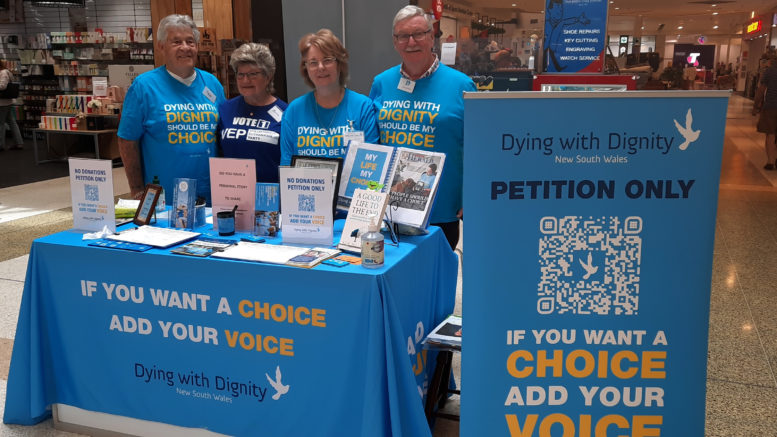 A Dying with Dignity stall will be set up at Woy Woy’s Deepwater Plaza on Wednesday, March 31 in a bid to collect signatures for a petition to push for voluntary assisted dying laws in NSW.

Dying with Dignity NSW has been calling for voluntary assisted dying (VAD) laws to be introduced through a bi-partisan effort to collaborate in trying to pass the Bill.

Next week’s stall will offer locals the opportunity to sign the petition and ask questions surrounding the terms as set out by the proposed Bill which is expected to be presented to Parliament in the coming weeks.

Coordinator of the Dying with Dignity Central Coast branch, Beverly Symons, said organisers are expecting to receive a good turnout at the Plaza.

“I do think that the general public, particularly anyone who has seen a person die in pain and misery, supports the introduction of this legislation,” Symons said.

“All of the MPs on the Coast are supportive of VAD laws, as are 88 per cent of the Australian population.

“We collected hundreds and hundreds of signatures at Bateau Bay shopping centre – people were really queuing up and we were quite amazed by the strong support shown.

The Central Coast branch have been pushing for this change ever since its inception in 1996, with Symons calling for desperate action.

“We’ve been in existence for a long time – it shows how long people have been campaigning on this important social issue for,” Symons added.

“Every public opinion poll in recent years has shown about 80 per cent of people support this move.

“We’re the only state in Australia to not be doing anything about it.”

The Bill is currently being drafted by Independent MP for Sydney, Alex Greenwich, and is based on Western Australia’s model.

It proposes that access will be granted to people who have a terminal disease, illness or medical condition with only six months to live, or for people with neurodegenerative conditions where suffering cannot be relieved.

Safeguards have also been put in place against coercion, Alzheimers and dementia patients as they do not have the decision-making capacity needed, and also permits for doctors to conscientiously object.

Vice President of Dying with Dignity NSW, Shayne Higson, said the organisation hopes to achieve 100,000 signatures by the time the Bill is debated in the second half of this year.

The petition which can be signed online or in person at the stall, currently has more than 30,000 signatures.

The stall will be open from 9:30am till 4pm and will also be at the Plaza on Saturday, April 24.