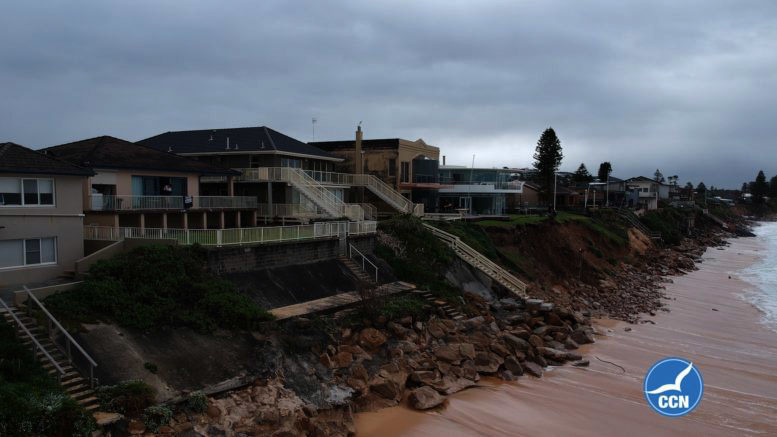 Central Coast Council Administrator, Dick Persson, says Council has no money for any of the erosion mitigation works proposed for Wamberal Beach.

He was responding to a resident who spoke ahead of Council’s March 9 meeting, where an update on the studies and the Phase 1 community consultation undertaken for the Wamberal Beach Terminal Protection and Sand Nourishment-Investigation and Concept Design project was considered.

Council engaged Manly Hydraulics Laboratory (MHL) to undertake a six-stage program that would end up with concept design options for a terminal protection structure (seawall) and sand nourishment, and potential seawall alignment and a cost benefit analysis to guide development of possible funding models.

“Further decision making is required to develop a methodology for implementing a long-term solution, that is legally permissible, environmentally and socially acceptable and financially viable,” the report stated.

The Administrator adopted the report which said that Phase 2 community engagement, which is planned to include workshops and the ability for the public to review and comment on the study reports, will start in March.

“Why are we spending $40M on this short to medium term adaptation when the Council is facing such financial stress,” he asked.

He asked for details from the Wamberal Beach erosion phase 1 engagement summary.

“It doesn’t give any real indication of how many of the submissions are opposed to a wall and how many are in support of a revetment wall or other options,” he said.

“Can this data be provided to the public?”

Ellis also asked how any of the five options for the beach were going to maintain the beauty and amenity of the beach and comply with the objects and requirements of the Coastal management Act 2016 which was meant to protect and enhance natural coastal processes and coastal environmental values including natural character, scenic value, biological diversity and ecosystem integrity and resilience.

He questioned the sense of building a 1300-metre wall for $40M at a time when the science of coastal management was moving beyond engineering options and at a time when residents are to suffer service losses and extreme rate rises.

But he said this was a frustrating area for him and had been since he came across similar problems at Collaroy on the Northern Beaches when he was Administrator there.

Persson said that while there he had developed a policy: landowners pay 80 per cent, State Government 10 per cent and Council 10 per cent.

He believed that, if done cleverly, the wall at Wamberal would not be seen most of the time thanks to sand replenishment.

But he agreed that Council had no money to pay for any of it at the moment and he thanked Ellis for his raising of the issues.

Environment and Planning Director, Scott Cox, said the report was just about updating the community.

Maintaining sand on the beach was the main concern of residents, he said.