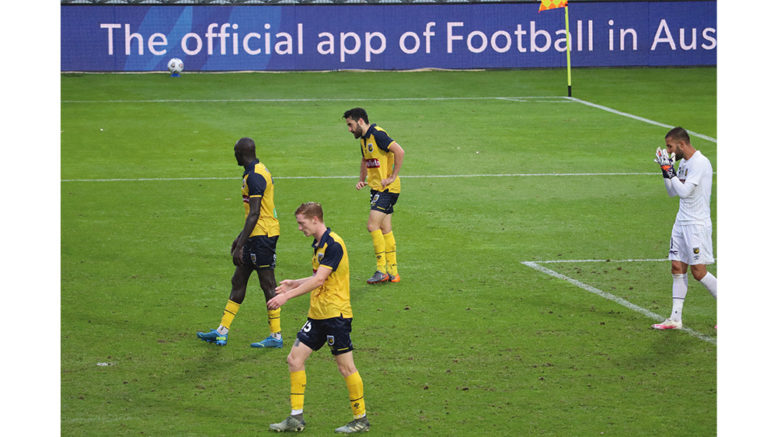 The Central Coast Mariners have suffered their fourth loss of the season, this time to Melbourne City, in a highly anticipated clash at AAMI Park on Monday evening, March 22.

The upward rising City have now made it five wins in a row, a streak they have not enjoyed since 2014.

The heavy rain that the Mariners left behind on their trip down south took time to catch up to them, with the game beginning with a light trickle that slowly picked up as the game went on.

The hosts launched into the game with an energetic start, first finding frontman, Jamie Maclaren, in the seventh minute with an incisive through ball.

Although called offside, it was an early alarm bell for the visitors of the prolific goal scoring form of the league’s top scorer, a player with 11 goals already against the Mariners, with seven in the last three games, including two hat tricks.

The pressure kept coming from City against the Mariners with multiple chances being made in the attacking third, yet it took up to the 31st minute for the opening goal to come to none other than Maclaren.

The lead in ball came from Connor Metcalfe, who sliced the ball through the Mariners’ defensive line to find Florin Berenguer-Bohrer in the box.

With space to wait for his attacking players to join him, he eventually fed Maclaren in front of goal, who side footed the ball first time to launch it over and around goalkeeper, Mark Birighitti.

For Maclaren, the goal marked his 90th in the A-League and 8 in 5 games.

The goal sparked a new kind of hunger in the home team, with Birighitti being faced with a quick succession of shots on target.

The Mariners began giving up possession too easily, not finding the link between the defensive mid quarter and the attacking third.

In response, City took full advantage of the open field in front of them resulting from the Mariners being caught on the back foot after unsuccessful counter attacks, more than once finding the through ball to set up an attacking player behind their opponent’s defensive line.

A 33rd minute save from Birighitti denied Maclaren his second goal, also coming from a first time strike of the ball.

Straight after, from the resulting corner, Adrian Luna had a golden chance at goal, and then another hard driven strike across goal a few minutes later, but Birighitti was equal to them and managed to keep his side in the match up to half time.

The second half saw the Mariners push back against the rising tide against them by finding more time on the ball, but they still struggled to get in a position on goal to challenge City’s keeper, Tom Glover.

To prevent a shift in momentum, City were forced to give away a few fouls and yellow cards, presenting the Mariners with more opportunities to move forward.

However, the pressure of City on the ball crept back into the game, taking away the Mariners’ consistency in pass accuracy this season by cutting down their passing lanes, forcing the prospective long balls in behind.

All night, the Mariners lacked their usual attacking urgency, made very clear with the counter attacking goal to City in the 55th minute.

A forward movement by a four man Mariner attack jogged up together in a line, without anyone making the incisive run ahead, so that when Nathaniel Atkinson pinched the ball from Jack Clisby, who hit the ground, unable to cover his defensive wing, and fed Andrew Nabbout out wide, he had all the space he needed to cut in on goal.

His strike hit Ruon Tongyik, who was able to cover in time, but Birighitti was left on the ground having anticipating the save.

The ball bounced ahead of Atkinson who moved onto it quickly, kicked it powerfully into the ground to make it bounce early above Birighitti and find the back of the net on a tight angle.

With a 2–0 lead and an opposition who were showing little aptitude for creating shots on target, the game cooled in the final minutes.

The game ended after four minutes of injury time, the players now soaked in the rain.

It was a disappointing result for the Mariners who haven’t finished a game without a goal since January, yet the team will have to recompose themselves ahead of their upcoming match against Melbourne Victory, or they will face losing their now unstable lead on the A-League table.

This game will be played at Central Coast Stadium on Saturday, March 27, kick off at 7:10pm.