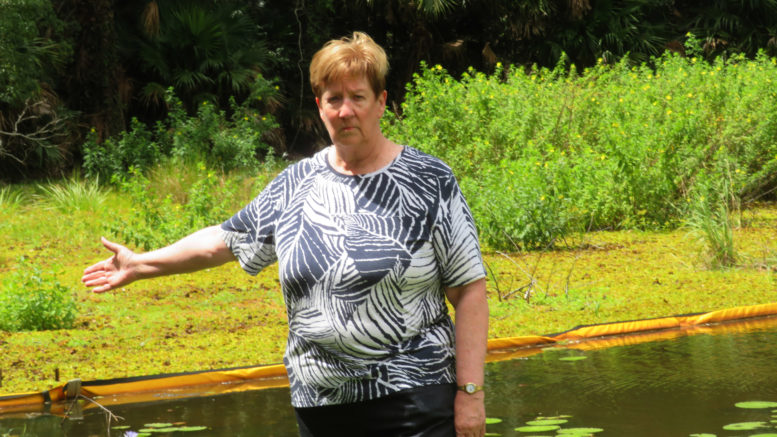 A year after Coast Community News reported an uncontrolled weed infestation at the Springfield Wetland, residents are frustrated that a solution is still not in sight.

The iconic wetland is partly owned by Central Coast Council, with the remainder in private ownership.

While Council has acted to remove invasive weeds on its section of the wetland, the privately-owned section remains inundated with a proliferation of three noxious aquatic weeds, putting the wetland in peril and other waterways at risk.

Friends of Springfield Pond Wetland spokesperson, Glenys Ray, said the issue had a long history and she had raised it with Council Administrator, Dick Persson, at the Council’s February 23 meeting.

“I spoke from the heart about the passion we have for this wetland and our frustration at the lack of any action on behalf of the landowner,” Ray said.

“The community feels strongly about the importance of this wetland.

“Our first shock was at how quickly the three weeds spread over Christmas, 2016.

“Our second shock was that only half the wetland was in Council ownership and the other half is part of a 4ha property, privately owned.”

Previously a refuge for flocks of a diverse range of birds the wetland has seen a drastic reduction in wildlife, with fears the noxious weeds could spread to other waterways by air-borne seeds.

Council made use of a $125,000 grant from the State Government to remove weeds on its side of the wetland in 2019, but the owner rejected a suggestion to take advantage of the large machinery Council was using and share the costs, Ray said.

She said residents were grateful for Council’s collaboration in removing weeds from its section but were frustrated that negotiations with the landowner to address the remainder were still ongoing.

“Council told me it had initially tried to work with the landowner and had now commenced enforcement action,” she said.

“I can’t believe that he is still refusing to do what we believe is legally and morally right and that Council has to waste time and resources on placing orders on him.”

Ray said Administrator Dick Persson had told her he hoped a resolution was “imminent”.

A spokesperson confirmer that Council staff were in “continuing discussions” with the landowner.

“Council staff will consider application of powers conferred through the Biosecurity Act 2015 as required in the resolution of this matter,” the spokesperson said.

“It is hoped that through current negotiations the landowner will undertake actions to manage the infestation of weeds, otherwise enforcement action will be required.

“Much focus is provided by Council’s biosecurity officers each year in identifying potential new weed incursions on the Central Coast, and preventing those weeds from getting a foothold, so that they do not become a problem like already established weeds such as Salvinia.”

Attempts to contact the owner of the privately owned section of the wetland were unsuccessful.