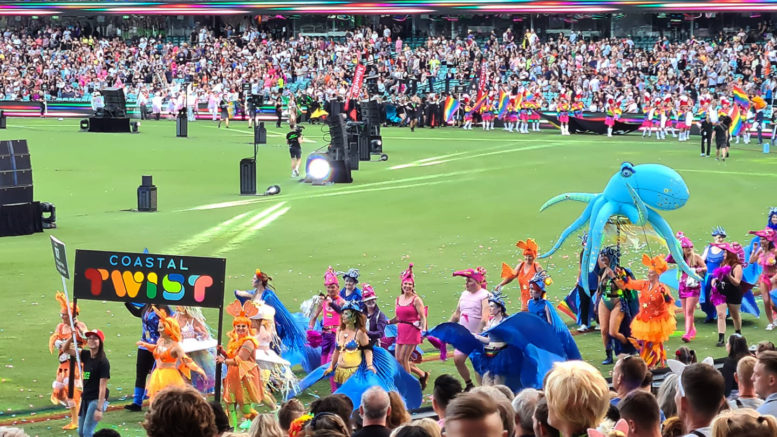 The local arts and entertainment organisation walked the parade in a flurry of colour and dance as part of the Central Coast’s Coastal Twist Festival.

The float served as the Noodle’s second experience at the famous parade after it made its debut last year.

“Our take on the [theme] was Regionals Rising, not only through the massive momentum gained for visible inclusion on the Coast, but the absolute broader shake up of marginalisation and exclusion that had been entrenched over generations here,” Supernova said.

“On a lighter note, we were rising from the depths of our gorgeous and iconic waterways as deep-sea creatures tapping into our coastal vibes.

“It’s so important to be a part of this visible diversity for our region, as a beacon of light and hope to all who are experiencing isolation; it’s a symbol saying ;you are not alone’ and there are vibrant and active LGBTIQA+ communities on the Central Coast that they can be a part of.

“It’s important to young, old and everyone in between.”

Due to COVID-19 health directives, capacity for this year’s parade was halved with only 40 people allowed in the floats.

Over the past few months, participants aged 14 to 75 have helped create the float, with a few changes from last year.

“This year we opened up the brainstorming and creative process with an open public consultation with the community, calling for ideas and direction,” Supernova said.

“Participants and volunteer costume creators then all started on weekly costuming and float making workshops which were a fun way for us all to connect and make new friends.

“In the final weeks, it all just came together like magic with the dance and dress rehearsal … it was so inspirational, uplifting and touching, week after week just full of all the good stuff!”

The group danced a big lap around the ground, waving and cheering, before going into the centre of the field to showcase the Coastal Twist float to audiences.

Coastal Twist Festival co-head float designer, Leigh Rijff, said it was great to bring positivity to audiences both in the SCG and at home.

“With all the adversity we have had there are going to be people from all around the world watching, some still in lockdown, and just to be able to put that cheer (and) sparkle (to) celebrate love, freedom, equality is a wonderful offering,” Rjiff said.

The Noodle will present an International Women’s Day show this Saturday, March 13, to showcase a multi-generational line-up of cabaret, burlesque and performance art acts.