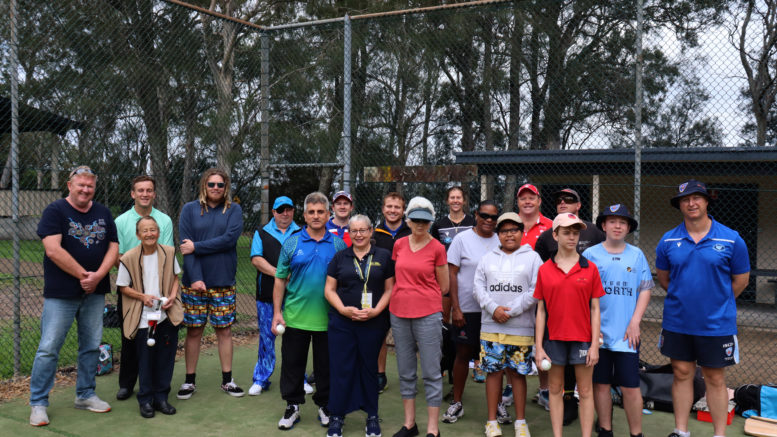 In an initiative led by Blind Sports NSW on Saturday, March 6, a team of blind and vision impaired athletes of all ages travelled to the Point Wolstoncroft Sports and Recreation Centre for a Multi-Sport Festival.

The intention of the event was to teach a list of blind sports to new athletes from the instruction of both vision abled coaches and fellow vision impaired athletes who have found domestic and international success in their sports of choice.

The day began at 9am with Blind Cricket and was followed by Golf, AFL, Tennis, Futsal and finally Goalball.

Each of these sports have their own history, with sports like Goalball and Blind Futsal now played at the Olympic level, whereas Blind AFL is a new endeavour in its foundational years in NSW.

The event was attended by Australian Blind Golfer, Graham Coulton, the current Australian Open Blind Golf Champion and previous winner of the British and Hong Kong Opens, as well as the NSW Open on multiple occasions.

Coulton, who is also the secretary for Blind Golf NSW and Financial Director of the International Blind Golf Association, shared his thoughts on the challenges blind and vision impaired athletes may face when approaching golf and other sports, and what they can do to overcome them.

“The biggest impediment is finding a golf club to accept you, for a start, and then it is making sure you get good coaching.

“Through Golf Australia, a number of coaches are being established who are multi-disciplined so they know how to teach disabled people including blind, deaf, those with cerebral palsy or an intellectual disability or whatever else the case may be.

“A little bit of funding has helped too because golf is an expensive sport, especially if you want to play at a competitive level.

“A visually impaired player has to be shown what to do, where to move the hands and legs, and how to move your hips through the swing.

“At the grass roots level, we’ve got to find the areas where people can learn those skills from a credible coach.

“If they don’t live close to where we play our social and competition games in Sydney on a regular basis, we’ve got to find them an area close to them.

“Coming to this Multi Sports day, it’s been fabulous.

“I’ve met a number of people from the Central Coast who didn’t know about blind golf before, who are keen but don’t know what to do.

“Get in contact with Blind Sports NSW/ACT and we can have a talk with you and see what we can do.

“We can arrange with Golf NSW to see if they can have an introduction at their local golf club, or find a pro who is prepared to work with them and allow them access to their club and assist them in getting started and playing the game that we all love.”

Alongside Coulton on this day was blind sports athlete in futsal, goalball and cricket, Steffan Negro, who is also a part of the steering committee for Blind and Low Vision AFL NSW.

Negro first found success in his sports in WA before his recent move to NSW and to Blind Sports NSW, and shared comments on how sport has helped him in life more broadly.

“For me personally, knowing myself before I got involved in all these sports, I noticed a change in myself in terms of confidence and in getting out and doing things a lot more.

“I understand how it can be a bit of a traumatic process for some, and quite nerve racking for others, so I really want to come out and help these new athletes come play their sports.

“Some people can be quite anxious about trying new things, especially if they are vision impaired or blind, so I try and give them a calming voice and a hand on the shoulder just so they can feel more comfortable and be more likely to come back and have fun.”

Beyond just the vision impaired, there was also an effort from Club Secretary for the Cardiff Hawks Junior AFL and AFL NSW Junior Development member, Neil Barton, who is involved in a movement to see the Newcastle-Hunter and Central Coast region AFL league, the Black Diamond Cup, extend itself to include Blind AFL in the future.

”The Black Diamond AFL has always had the men’s league, but from here it soon developed into a junior sport as well, and then most recently, over the past ten years it has started into the women’s and girl’s football as wel,l which is getting stronger and stronger every year,” said Barton.

“To come into the inclusion sports now is a really big thing for this area and for AFL in general.

“In five years’ time, I see more and more people being involved in Blind AFL.

“Everyone needs to be involved and included in sport and we see AFL as one of those sports that can actually include everyone to some capacity.

“I definitely do see a competition for Blind AFL coming together in our Black Diamond league, and being here today has been fantastic and a big eye opener.

“To have inclusive sports means having people like myself, who are able to see, get involved, help these people out and make sure that they are involved with everybody.”

After a long day of sport, the multi festival ended with high spirits and the desire to return to the Central Coast for more events remaining in the minds of the event organisers.

With the involvement of both the blind and vision impaired as well as the able visioned, an opportunity to expand the inclusion sports in the Central Coast has never been more profound.