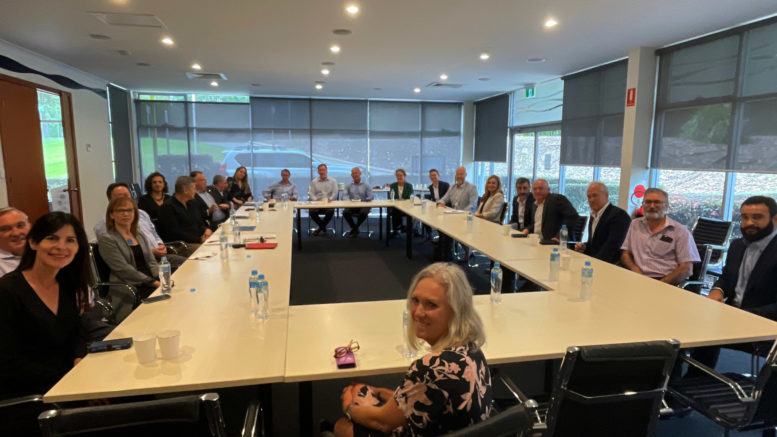 Regional Development Australia Central Coast (RDACC) is hoping that a roundtable held on March 11 will be the beginning of a new co-operative approach to encouraging new and expanding businesses to the region.

Hosted by RDACC Chair, Lawrie McKinna, said the session was attended by key decision-makers, including state and federal MPs and representatives of government and business agencies.

It was the first time in local collective memory that critical stakeholders from all levels of government and both sides of the political landscape had been in a room together to collaborate on a cohesive agenda of priorities for the Central Coast, McKinna said.

“I have had individual meetings with many of these people but I don’t think they’ve ever all been in a room together to focus on a positive way forward for the Coast,” he said.

McKinna said the session, which will be the first in a series, would form integral part of RDACC’s role in providing an important conduit between all levels of government and industry to work together towards enhanced outcomes for the Coast.

“Everybody’s busy doing their own things but it’s important we work together,” he said.

“We will be putting out monthly releases focussing on the good news on the Coast.

“With Council in a state of transition and Council, State and Federal elections all looming, it’s important to have meetings like this, where politics are put aside, to focus on achieving good things for the region,” McKinna said.

He said a major emphasis would be on encouraging businesses to relocate to, or expand on the Central Coast.

“With more business will come jobs and then more development and housing.

“It was a refreshing, positive meeting, with no mud-slinging and a lot of positivity; a significant achievement in strengthening the understanding that we all have about singing with one voice to deliver shared outcomes for our community.”

RDACC Director Regional Development and CEO, John Mouland, said the discussions focussed on the need to maintain a united identity for the Central Coast to remain competitive and prosperous into the future.

“Together we need to build a strong regional identity that we can all be proud of,” he said.

“There is a lot of good work being done and the roundtable was an opportunity to align key priorities and work towards a common goal.”

RDACC will provide a central point to co-ordinate and communicate monthly updates Coast-wide on priorities and actions from the collective stakeholders.

The next roundtable is scheduled for April, with the view to have Central Coast Council representation.

“The new CEO, David Farmer, will be on the job by then and we are hopeful he will come,” McKinna said.

Dinner’s on us – State Government