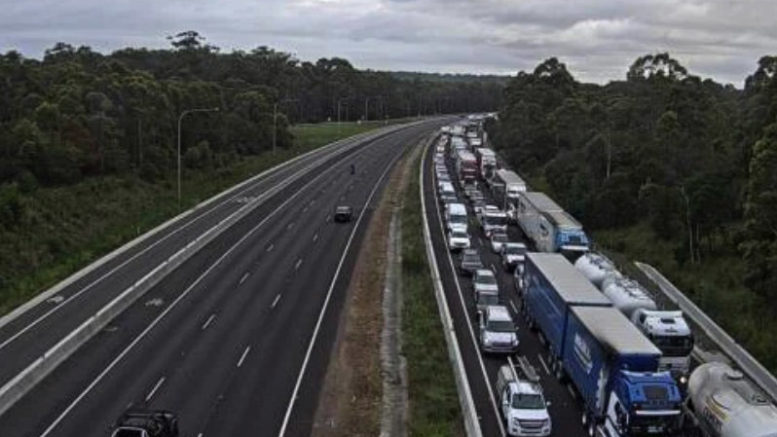 There was mayhem on the M1 near Wyong on Thursday, March 11, due to damage to the road surface and reports of debris on the road near the Alison Rd overpass.

Problems started in the early hours of the morning with several motorists having to contend with tyres that had blown out and buckled rims after driving over the damaged road surface and the large gap which opened up in the M1 road pavement.

Just after 4am emergency services, Transport for NSW staff and an engineer were on site and two of the three southbound lanes were closed.

Tow trucks were called in to remove the vehicles with tyre trouble which caused even more disruption to traffic.

A Transport for NSW spokesperson said a four-metre steel plate covering an expansion joint became detached on the M1 at the southbound Deep Creek No.3 bridge at Wyong.

Expansion joints are installed to accommodate movement, shrinkage and temperature variations on bridges.

The bridge had to be urgently repaired, which involved forming and pouring new concrete to replace the steel.

By 7am, it was havoc, the queues on the M1 were 10km long, only moving at a crawl, and there were reports that some motorists had been in traffic at a standstill for up to two hours.

As the news got out, motorists started taking detours and other shortcuts but it wasn’t long before all other roads in and around Wyong were in gridlock.

Children were stranded at bus stops for hours waiting for their school buses while many others decided to walk, causing a different set of safety problems because in many locations there are no footpaths for the children to walk on.

The repair work continued through the morning peak and it was expected to go on until early evening, however, at 2pm, Live Traffic NSW announced all southbound lanes were again open although traffic remained heavy for some time afterward.

Following this incident, Transport for NSW carried out further inspections of bridges with a similar type of joint and identified a piece of expansion joint on the nearby Deep Creek No.2 bridge which required urgent replacement.

That work was completed by 7am on Tuesday, March 16.

Transport for NSW is continuing its investigations into this type of bridge joint to reduce the risk of similar issues and to ensure the safety of all road users.

Motorists who sustained damage to their vehicles which they believe has been caused by the condition of the road can lodge a claim for repair costs.