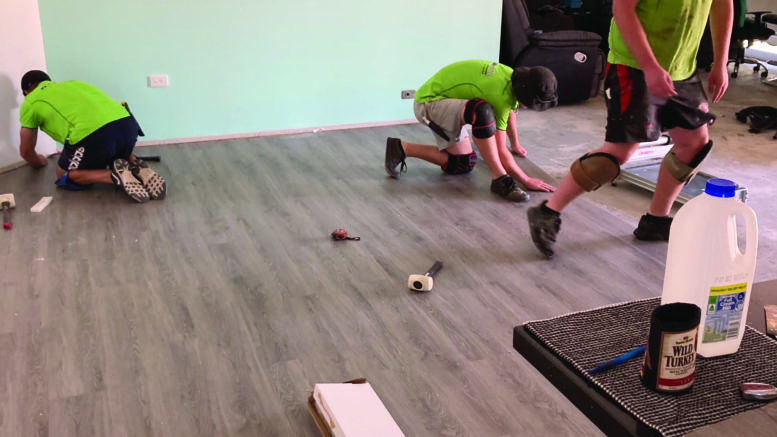 A Hamlyn Terrace grandmother and her four grandchildren no longer have to live on cold, dusty, cement floors after a collaborative effort from the community to install their house with floorboards.

The family has been living on cement ground for almost two years after complications and financial problems with a previous flooring company.

The grandmother, Helen, was the sole carer of her four grandchildren aged between eight and early 20s after the family had gone through personal hardship.

As a pensioner, she had not been able to pay for a replacement floor, motivating Mazur to take matters into their own hands.

“Every time we would go around to see the family, Helen would be in tears, as all she wanted was to help and support her grandchildren,” Mazur said.

“We took the previous floor company to Fair Trading and eventually got them to pay Helen her money back.

“We told her to use that money for other things, and we would take care of the floor.”

After emailing many flooring places, Mazur came across Central Coast Floormasters Kincumber, who had previously participated in the Free Trade Day initiative, a day dedicated to delivering free services or trade work to those who need it most.

Unfortunately, due to COVID-19, the Free Trade Day initiative was not funding any projects but Central Coast Floormasters decided to fund and complete the project anyway.

Karen Norkett from Central Coast Floormasters said the decision to help the family came after she visited their home.

“The house was so grim,” Norkett said.

“We spend the three days before Christmas laying down flooring.”

Jorna Services and Central Coast Floormasters were not the only ones to make this family’s Christmas.

Mazur said the floorboards have helped lift the family’s spirits and ensured they had a happy Christmas.

“The family still has its struggles, but they are doing really well.”

All of the donating organisations were mentioned in a Community Recognition Statement made by Parliamentary Secretary for the Central Coast, Adam Crouch, in State Parliament on February 18.