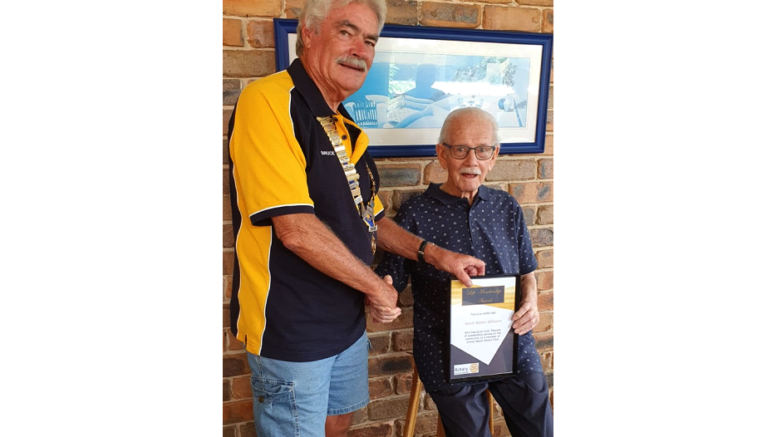 Williams was recognised for over 30 years of service to the community as a member of the Club.

The award was presented to Williams at a special ceremony at his home in Empire Bay, and was attended by his daughters Tracey and Melissa, and son Brad.

“The memories that stand out include supporting local youth, including being a trustee for the Umina Rotary Bursary Fund, hosting international Rotary exchange students, setting up the Probus Club of Umina Everglades, and the many friendships [found] through Rotary,” Williams said.

“I look forward to visits from friends made through Rotary and Probus.”

The certificate presentation was made by Club President, Bruce Croft, supported by past presidents Tom O’Connor, Wayne Dowdle and Mike Curley.

“His dedicated service has been recognised along the way by the awards of a Paul Harris Fellow and a Sapphire Pin,” Lewis said.

“Kevin was always one of the first to volunteer for each local project of Umina Rotary.”

As Club treasurer for 11 years, an attendance officer for over 20 years, and Club President in 1989/90, Williams has sought a variety of roles within Rotary.

Williams was also actively involved in the Probus Club of Umina Everglades, participating in committee roles for a number of years as its first Secretary and second Club President.

Rain? Maybe on another day