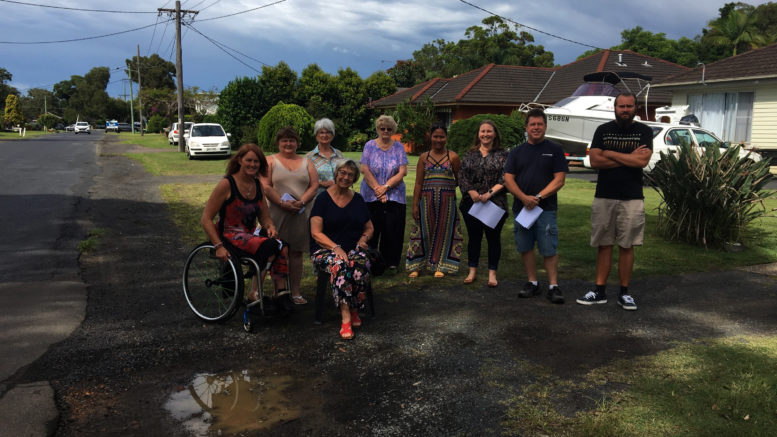 Residents of Haynes Ave, Umina Beach, are sick of their street being used as a rat-run and are demanding safety measures be taken to protect residents – especially children.

Residents say safety precautions are non-existent and have enlisted the support of Member for Gosford, Liesl Tesch, in demanding improvements.

“Both main roads at either end of Haynes Ave received upgrades in the past few years, which was very important, but Haynes Ave was left to be simply the link between these roads without so much as a pothole repair,” residents said in a letter to Tesch.

“In the last two years traffic monitoring has taken place and revealed an average 1,893 cars per day use our link for their journey.

“That is a huge amount of traffic for a 50km/h street, given that 85 per cent of these travellers exceed the speed limit, according to Council statistics.

“That’s 690,000 car movements per year for an avenue with an appalling road surface, no speed limit signs, no drainage, no traffic islands, no regular police patrols and no traffic calming devices.

“There is a children’s park on the corner of Haynes Ave and Ryans Rd.

“Our main concern is for the welfare of small children using this park, especially when drivers continue to cut through the park corner without any consideration for their safety.”

Residents say the situation has been exacerbated by the recent addition of a new set of swings closer to the corner.

They are calling for immediate traffic calming measures including: traffic islands at each end of Haynes Ave, especially one to
prevent cars from cutting the corner of Haynes Ave and Ryans Rd; a road upgrade, including drainage, to safely control excessive traffic movements; traffic calming and speed controls to minimise speeding and anti social behaviour; and the installation of speed limit signage.

Tesch met with residents on site on February 25 and said she was told residents won’t even go for a walk or let their kids play in their front yards for fear of dangerous drivers.

“Resident and father, Wade Nelson, refuses to let his children play outside or walk them to the recently upgraded Council-run playground at the end of the road,” she said.

Tesch said the condition of the road was not suitable and an upgrade was needed.

“Data has shown that Haynes Avenue continues to experience increased volumes of traffic, but the narrowness of the road, and lack of speed signage, road delineation and safety islands jeopardises the safety of residents living on this road,” she said.

“I will be working with residents and writing to Central Coast Council and the NSW Government concerning road funding to fix these issues.”

But a spokesperson for Council said the road does not merit traffic calming devices.

“All residential streets in NSW have a speed limit of 50km/h unless signposted otherwise,” the spokesperson said.

“Any instances of excessive speed or anti-social driver behaviour should be reported to the NSW Police for their attention and appropriate action as the responsible authority.

“Notwithstanding this, late last year Council undertook a traffic survey which included collecting data on the speed and number of vehicles travelling along Haynes Ave to identify whether improvements to the road network were warranted.

“This survey was part of a wider project to identify traffic speed and volumes within the immediate area.

“The results of this traffic survey revealed that there were approximately 1,900 traffic movements per day in Haynes Ave, which is considered acceptable.

“The results of the traffic survey do not currently warrant the installation of engineered traffic calming devices.