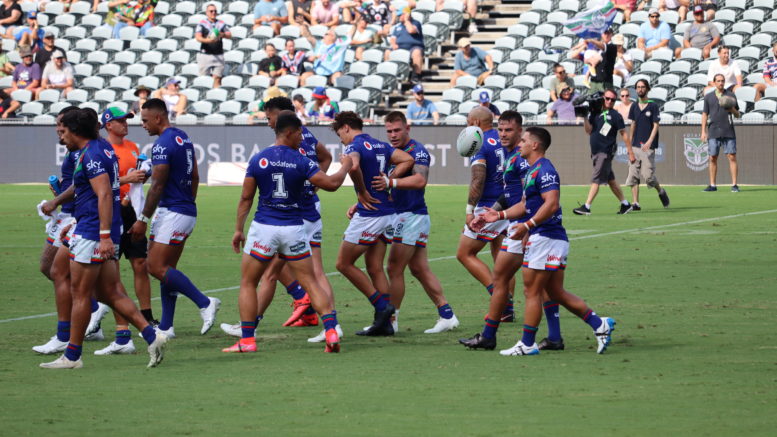 The New Zealand Warriors have triumphed in their first outing of the 2021 NRL Season with a convincing win over the Gold Coast Titans on Saturday, March 13 at Central Coast Stadium.

The 19 – 6 victory in the 30-degree heat was shared among a strong showing of Warriors fans who came to support their footy club at their home-away-from-home as the team await confirmation on the foundation of a Trans-Tasman bubble.

The stadium announcer heralded the “Central Coast” Warriors at half time as the team took to the sheds with a 6 – 0 point lead, an explicit example of the region’s willingness to house the NRL team for as long as possible – especially if the wins keep coming.

The half time lead was hard fought by the home side, coming in the 25th minute by Bayley Sironen and converted by Kodi Nikorima.

The third phase play started from five metres out, under the posts, and a simple hit-up pass from Wayde Egan fed Sironen at pace, who scrambled in the tackle to spin around the outside and find the white line.

The 52nd minute of the second half brought more success to the Warriors in similar, hit-up fashion to the first, this time via Jazz Tevaga’s dummy-half pass to Leeson Ah Mau, with Tohu Harris cutting into the inside channel ahead to draw away the defence.

With Nikorima’s second conversion added, the 12 point lead provided the cushion to the home team, which the kicker added to in the 69th minute with another converted try.

Starting from 25 metres out, the initial momentum came from Chanel Harris-Tavita feeding Bunty Afoa into half a gap of space between the defenders.

With his upper body free, Afoa presented the offload to Nikorima, who took the ball under the posts in a few quick strides.

The 16 point lead would prove too much for the Titans to come back from, although a late surge from the travellers just three minutes later brought the team their opening points of the season through Corey Thompson.

The robust Warriors defence was finally undone by a well-timed cut-out pass by Alexander Brimson that found Thompson with the overlap on the wing, and the conversion by Jamal Fogarty gave the Titans hope.

Yet this was the most the Titans got out of the game, and a field goal from Harris-Tavita on the siren brought the end score to 19 – 6.

The first-round win will steady the Warriors ahead of their next match at Central Coast Stadium against the Newcastle Knights on Friday, March 19, where they will hope to replicate the home ground success of the Central Coast Mariners this season.

At the same time, the Warriors fans from the Central Coast and surrounding regions may themselves hope that such success will bring the squad to take to heart their new ‘Central Coast Warriors’ identity, although, with the club’s rich history in representing New Zealand in the NRL, this will be a challenge to realise.

Have your say on rezoning of stadium site

Free Cinema Under the Stars