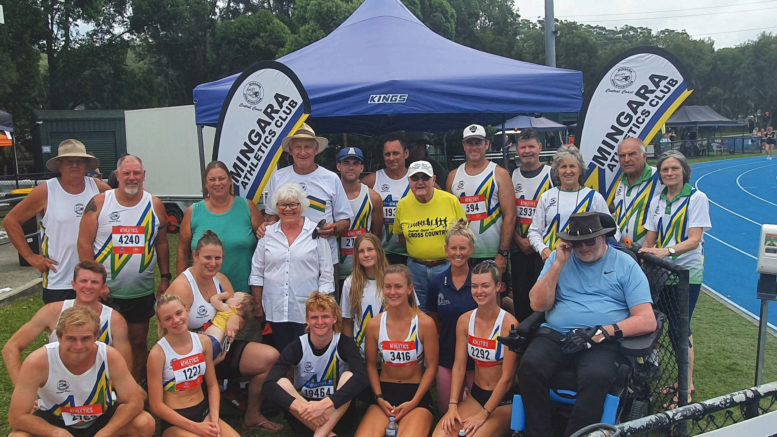 Although still awaiting word on the final point tally, the hosts scored many podium places and will fancy their chances at retaining the much longed-for Hoopers Cup.

The event was held at the Mingara Regional Athletics Centre and involved many clubs from NSW Country, both north and south of Sydney.

Also from the Central Coast came Wyong, Gosford and Woy Woy Athletics Clubs, who also found gold on occasions throughout the event.

Although competitors from each club were competing in tandem, with points accumulating over the three days of events, there were many individual successes for both Mingara and Wyong.

Masters Shot Put wins came for Julia Atilla and Matt Sammons in the 30-39 age group and Gavin Murray in the 60-69’s.

Saturday began with the 400m races at Mingara, where six athletes from the host club excelled to the top.

A lot of excitement was brought to the 100m sprints which ran along the track’s grandstand full of cheery supporters.

In the 4x100m relays, Mingara took out wins in both the Under 16’s and 30+ division, thanks to Christopher Rae, Liam Coles, Taj Garner, Matthew Potter, Daniel Sammut, Jason Cherry, Steven Smith and Hillary Dube.

A High Jump win went to Hayley Corderoy in the Under 17’s, after clearing 1.55m on her third and final attempt, with Cameron Cheney later winning the Under 18’s Javelin throw with 51.80m.

Competing for Mingara was Lani Withnall, who earned herself a gold medal in the Opens Triple Jump with a national qualifying distance of 11.80m.

The final day of competition started with the 3000m run, which brought success for Margaret Aurisch with a time of 15:58.17 in the 70+ division.

With this extensive list of gold medals alone for Mingara, the home club will fancy their chances of retaining the Hoopers Cup which they have managed to hold since 2015.

However, with many wins going the way of Wyong, the fellow Central Coast club will consider itself in the mix.

Jamie Muscat made the overall number of Wyong competitors appear to be much larger, obtaining for himself and his club four gold medals.

Kynan Johnson’s 11.87m Triple Jump brought him gold in the Under 17’s to wrap up Day One for Wyong.

Regardless of who wins, with scores still being counted as of Monday, March 1, both Mingara and Wyong have many wins, further podium placements and fierce efforts to bring pride and honour to the Northern Central Coast athletics scene.