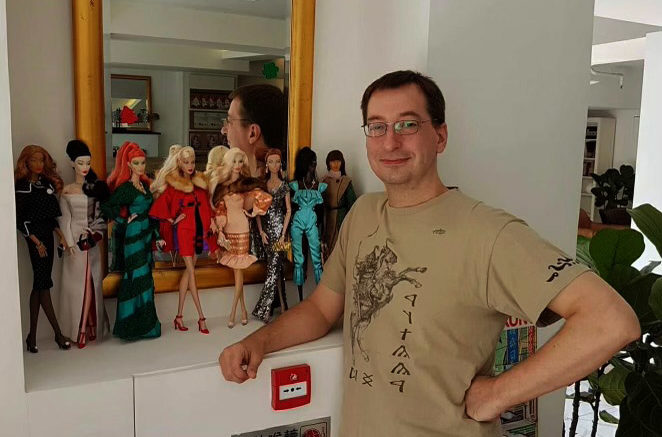 Founder of GlamourDollsOz, Jozef Szekeres, with his range of fashion dolls

The fashion dolls industry is a niche, yet large business, and Coastie, Jozef Szekeres, has become one of the big players.

Fast forward to now and Szekeres’ doll, Kotalin Bizelle: Ribbon Reveal, recently became one of the winners in the Collectible Teen/Adult Dolls category for the American DOLLS Award of Excellence Industry’s Choice Awards.

What makes GlamourOZDolls different from other dolls in the industry is their close-to-realistic look and height difference.

Instead of designing them to be the usual 16 inch height, Szekeres decided to make his dolls 18 inches but still able to wear the standard 16 inch fashion doll’s clothing and shoes.

His collectable fashion dolls sell for over $400 and can be dressed in many different themed and non-themed accessories.

Szekeres began his career in 2D animation, animating the Disney Princesses (such as Ariel and Jasmine) for Disney Animation Australia for 13 years.

He co-designed the 2000 Sydney Olympic Mascots, including their first physical 3D sculpts.

He also co-created and illustrated several comic book series published both locally and internationally for WaRP and Image Comics.

Szekeres said his passion for fashion dolls began as a child when he had his own Barbie collection.

“My mother would buy dolls for me, which I loved.

“As a child, I would play with these dolls, wrap them in fabric to make mermaids, and paint them… I did it in a creative way.

“As a child, teased for owning and playing with Barbie dolls, I imagined what my own future glamorous doll might look like.

“I remember going through the shops and seeing the Barbie doll which was $10-15, and then seeing right next to it the clone copy that had been made badly.

“I would look at it and think, they had the same materials, the same jointing and articulation – the only difference was the artwork or the sculptor that has done this before.

“I remember thinking, I want to make them.”

For the past two and a half years, Szekeres has lived in China on-site at the factory, overseeing production and also being involved in production and quality control.

Szekeres said collectable dolls became more than just children’s toys back in 1995 when the famous American illustrator, Mel Odom, released his own line of fashion dolls.

“What he did which was different to what was happening in the marketplace at the time; he created his dolls to be 16 inches tall instead of Barbie’s height of 11.5 inches,” Szekeres said.

“So it became a much larger scale when you could compare the two.

“Around the time he released them, Barbie’s vintage original 1959 and 1960s garments and dolls were released and were going for crazy amounts of money on the secondary market; for up to $2,000-$3,000 USD for garments, and dolls for much higher.

“When his dolls first came out, it was quite different them being a different scale because there wasn’t a huge catalogue of clothing for the doll to wear.

“But he was very clever and released three dress dolls and then a whole wardrobe that could be purchased separately, so that got collectors on board straight away.

“These dolls were made specifically for collectors because the price range was in the several hundreds of dollars.”

Szekeres explained since the 16 inch dolls were larger, ultimately, the scale of the clothing was larger.

This meant there was more focus on creating outfits made of higher quality materials, metallic jewellery, fabric shoes and bags, and accessories that presented in a much more high-end way.

Szekeres’ products are some of the best in the business and are sold all over the world.

“Now as an adult, I make my own GlamourOZ Dolls,” he said.

“What was once a source of shame, has now evolved into strength and beauty.”