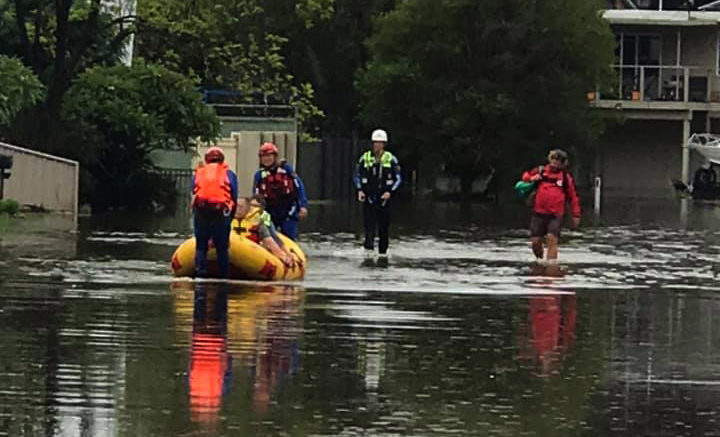 Water rescue in Berkeley Vale during the recent flooding

The Fire Brigade Employee’s Union (FBEU) is calling on the NSW Government for increased resources on the Central Coast in response to climate change related disasters, including bushfires and floods.

He said that over the past week, Fire and Rescue NSW had completed hundreds of flood related rescues and call outs across the Coast, about eight times the normal workload.

“On the Central Coast, homes are being inundated, roads are flooding, businesses are struggling and Fire and Rescue NSW has a desperate lack of trained swift water rescue teams on the Coast,” Drury said.

“While volunteers are doing their best to do all of this work, professional firefighters guarantee a response and are out the door and at an incident extremely quickly.

“To increase this training, the Government needs to fund a training centre on the Coast and get this happening.

“By the next flooding event it’ll be too late.

“This work has to start tomorrow to protect Coast locals,” Drury said.

“With hundreds of rescues that have been done during this emergency, Minister Elliott needs to come out and back the service that saves lives and recognise that it requires additional investment,” he said.

“Minister Elliott is on record saying that he would love to have a fire truck and a platoon of firefighters on every street, yet there are entire suburbs without a fire station.

“Fire and Rescue NSW are the first responders to fires, hazmat, rescue, storm and tempest events, they are the surge capacity when these incidents are prolonged or widespread.

“It does a great job and FBEU members give a guarantee of service with 90 percent of calls responded to within 10 minutes.

“That’s on top of response to normal daily demands.

“The reality is when your life shatters, firefighters are there when it matters.

“It’s obvious that the Government doesn’t want to spend money on protecting communities, to prevent blowouts in response times means we need more fire stations and firefighters to serve the community.

“This disaster and last year’s bushfires show that the Government needs to plan and prepare for the worst case scenario in emergency services.

“Sadly, the Berejiklian Government closes its eyes when the worst happens,” Drury said.

A spokesperson for Fire and Rescue NSW said there were 19 training facilities across NSW and three of those were in the Newcastle/Hunter area.

“Firefighters from the Central Coast also have access to the Rural Fire Service training site at Charmhaven, with access enabled through co-operative training arrangements,” the spokesperson said.

Clean-up nets over 2,000 tonnes of wrack and debris

Coastal and flood hazards community sessions to be held