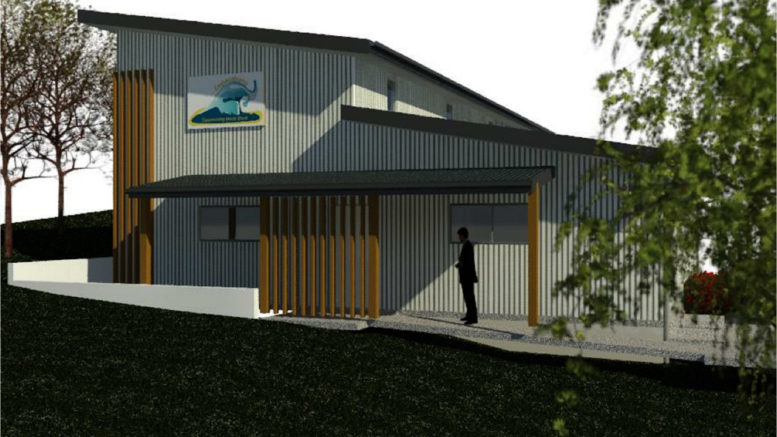 An artist’s impression of the new Copacabana Men’s Shed

Plans to build a Men’s Shed at Copacabana in January were dealt a blow when Central Coast Council refused to allow any construction to begin until the project is fully financed. Though the community are raising funds through a crowd funding program.

“This is very disappointing because it was always our intention to complete the shed in two stages and it was our understanding that Council accepted this,” Shed Coordinator, Mike Mitchelmore, said.

“We have applied for numerous grants over the last year but have been unsuccessful owing to the volume of applications and limited funds available.

“In our last application only six per cent of applications received funding.”

The committee has launched a public GoFundMe Campaign and is also seeking sponsorship from local businesses to raise the $110,000 needed to complete the project.

“The aim is to raise enough funds to fully complete all aspects of the shed and have a fully functioning and operational shed from day one after completion of the build,” Mitchelmore said.

“The committee would like to ask all residents to consider making a donation.

“Even if it is only the price of a coffee, it will help us towards reaching our target.”

A Central Coast Council spokesperson said the development application for a Men’s Shed on Council-owned land at 86A Copacabana Dr was approved by the Local Planning Panel on August 6, 2020, following the receipt of 15 submissions/objections to the proposal.

“There have been some very minor amendments to the approval, including permission to remove one additional tree that was shown to be in poor condition,” the spokesperson said.

“Before entering into an agreement to lease the land, Council has a responsibility to ensure the association has secured adequate funding to fully complete the construction of the proposed development.

“This avoids a situation where the construction may be partially completed, should funding issues arise, which would pose a safety risk to the community and open Council up to the risk of needing to take on the liability to complete the project.”

Sponsorship details are available at copamensshed.org.au

You can contribute to the fundraising campaign at https://www.gofundme.com/please-help-us-make-copas-mens-shed-a-reality.