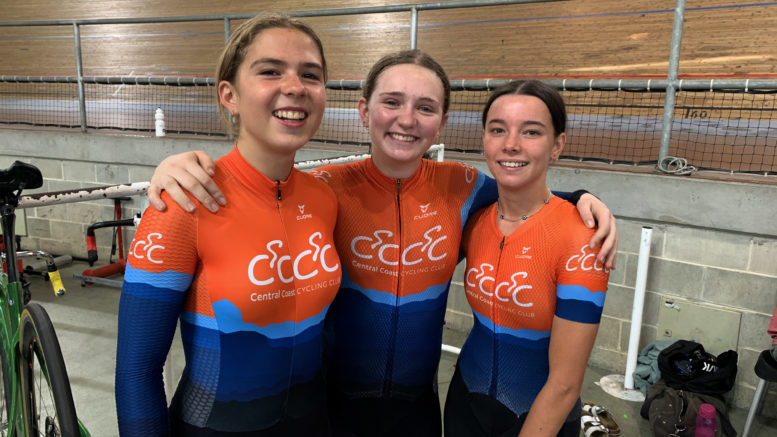 The trio of Nicole Duncan, Liliya Tartarinoff and Maya Dillon each performed at an exceptionally high standard, often competing with each other for the top spot in the individual races.

Day One on Saturday saw Nicole reach new personal heights in the Individual Pursuit heat stage, beating her previous personal best time by eight seconds and scoring the second fastest qualifying time, before going on to achieve a silver medal in the final.

In the Keirin race, both Nicole and Liliya made it into the final, together earning the gold and silver medal.

An early attack by Lilia brought her the lead well ahead of the competition with two laps to go.

However, on the last turn, the space between her and the others quickly diminished with Nicole overtook her in the final straight, taking first place by less than a bicycle length.

Day Two brought more success for the team with each three members achieving personal best times in the Time Trials.

In her heat, Maya took 2.377 seconds off her previous best after a very fast first lap.

In the next heat, Liliya overtook Nicole’s national fastest time this season of 36.738 with a new record of 36.654.

These two again received first and second place, this time with Liliya in front.

Maya was not far behind in fourth place.

Finally, the event included a presentation of the NSW 2020 U15 Women Cyclist of the Year, which went to Liliya.

After the performance of these three cyclists, they have all been selected in the Under 17 Women’s NSW Junior Team to compete at the 2021 AusCycling U15–U17 Track National Championships to be held in Brisbane from April 6-10.

Entering into this team of six, the Central Coast Cycling Club members make up half the numbers in their gendered age group, a clear showing of the high quality of cycling on the Central Coast.