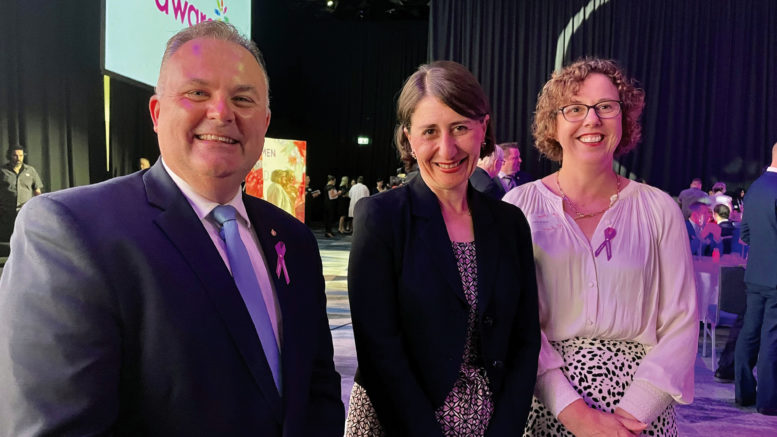 Adam Crouch and Gladys Berejiklian with Claire Braund at the awards

Terrigal resident, Claire Braund, has been named Terrigal electorate’s 2021 Woman of the Year in recognition of her outstanding work in the community.

The award was announced at the NSW Women of the Year Awards at the International Convention Centre in Sydney on March 10.

Parliamentary Secretary for the Central Coast and Member for Terrigal, Adam Crouch, said Braund is a businesswoman, social entrepreneur and community leader who advocates for more women in leadership positions.

“Claire co-founded Women on Boards Australia in 2006, an organisation which supports women being appointed to a range of leadership positions,” Crouch said.

“Many hours of Claire’s time are also dedicated to volunteer causes, including as the current Vice President of the Central Coast Conservatorium of Music.

“She is also a highly respected speaker on gender balance and related business issues.

“Claire is a formidable force to be reckoned with and I can’t think of anyone more deserving of this award.

Braund said she was “very proud” to receive the award.

“It was a complete surprise; I had no idea until Adam Crouch rang to let me know I was receiving it,” she said.

Braund said she and co-founder, Ruth Medd, were extremely pleased with the growth of Women on Boards.

“We have been going for 15 years now and have achieved a lot of change,” she said.

“The network is a self-sustaining activity now and we have thousands of success stories.”

Braund said the organisation had pushed hard for changes to the Corporate Governance Code and said it had been a privilege to help many women into leadership positions.

“We work both with the women and the organisations and the free public vacancy board on our website has proved very successful,” she said.

“The quality and calibre of the network has grown and, with it, confidence (among organisations) that they will be able to find really good candidates.”

The Local Woman of the Year Award recognises and celebrates the support that women give to their local communities.,

“These women are the backbone of their communities, volunteering their time and energy to make a positive difference,” she said.

“I would like to acknowledge their significant efforts to support their local communities and thank them for all the work they do.”