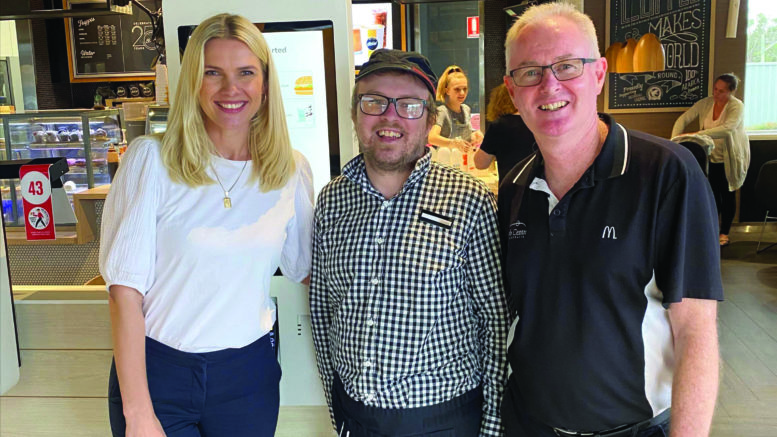 For the past five years, Chris Crocker has been working at McDonald’s, which for him is an amazing feat.

Crocker has Asperger’s syndrome, and was hired in 2016 as a crew member at the Wadalba restaurant, where he has been serving up a storm, with customers visiting from Sydney always making sure that they call in to see Crocker when they are in the area.

His hard work has not gone unnoticed either, as he received a Hospitality Heroes award in both 2016 and 2017.

He was also the runner-up in the 2019 Wyong Regional Young Employee of the Year award.

Crocker has also received many awards and compliments from McDonald’s head office.

“It’s something I’m so proud of, to be receiving praise from head office,” Crocker said.

Crocker was hired with help from the disability support employment program offered by Job Centre Australia.

“The franchisees on the Central Coast gave the guys a go and Chris has now become one of their most valuable staff,” said Ash Mackinnon, who is Job Centre Australia’s Community and Employer Engagement Co-ordinator.

Reflecting on his five years at Macca’s, Crocker said: “it’s just amazing being able to go to work every day with a smile and getting to serve customers and making them feel welcome”.

He also had some encouraging words to other disabled and neuro-divergent people looking to enter the workforce.

“Just believe in yourself and know that you can achieve your goals, and don’t let your disability stop you from achieving your goals or dreams,” he said.