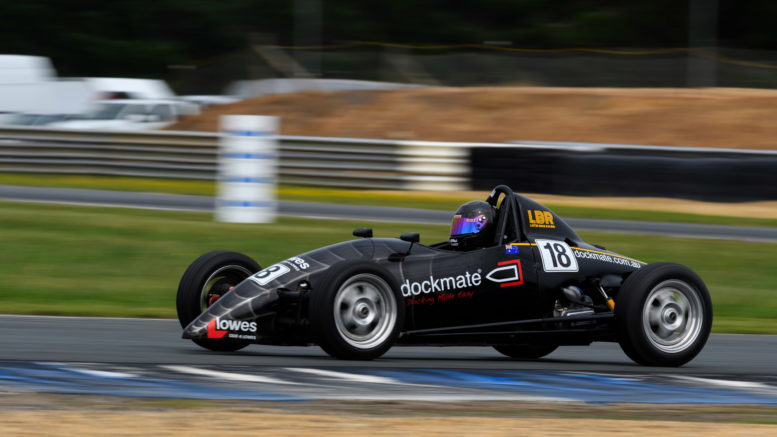 Central Coast brothers and open wheel race car duo, Ben and Paul Lister, performed at Round One of the 2021 NSW Formula Vee Championship at Wakefield Park near Goulburn on Saturday, February 27.

The day brought a strong start to the Series, especially for Paul who secured a top ten finish, his best result to date.

Now in his second year of racing in the Formula Vee Championship, Australia’s most affordable race car category, Paul is joined by his brother Ben, and the two view each other as internal competition within the Series to help push them to new heights.

Now in 2021, Paul will be driving the number 18 Team Dockmate car against Ben in the team’s number 17 car, sponsored by Lowes Petroleum Service, with both competing for the ‘Lister Bros Cup’ at the end of the season.

“If it wasn’t for the track day and Paul doing the research, we would never have discovered Formula Vee and the fun that you can have traveling at speeds approaching 200km/h.” said Ben.

“Formula Vee is a great category for anyone looking to get involved in motorsport at an affordable price point and the atmosphere is just like a club where other drivers will help you with repairs or lend you a spare part just to make sure you make it onto the track if something goes wrong.

“Don’t get me wrong though, our cars are numbered seventeen and eighteen just like Dick Johnson and John Bowe and there will be just as much rivalry between us as there was between the two racing legends,” finished Ben.

The Lister Brothers now look forward to Round Two of the Series to be held in April with training and testing sessions being conducted by the two at Luddenham Raceway, and Brother Paul is in no way backing down from the internal competition.

“I am really looking forward to racing this year because we will have a race within a race,” said Paul.

“2021 is the first year we will actually race against each other so in addition to the main game we will also be keeping a close eye on each other in what is set to be a closely fought battle, but I’m confident I can secure the silverware.”