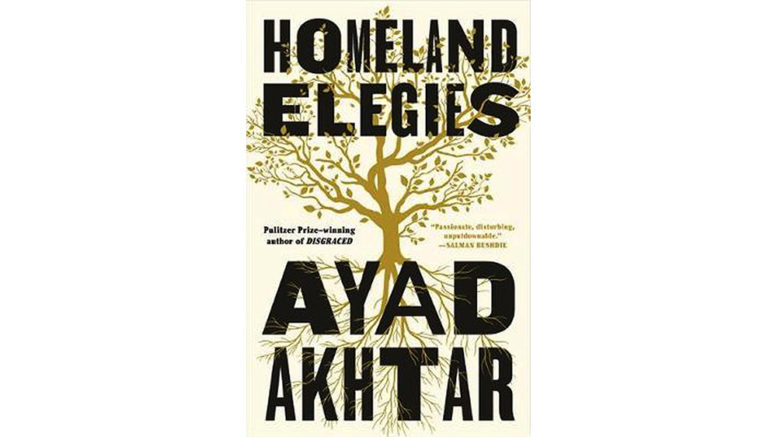 I hadn’t heard of Ayad Akhtar before reading this book.

He is a screenwriter, a novelist and has written award winning plays.

He was born in Staten Island and brought up in Wisconsin.

His parents are from Pakistan and met while attending medical school and then immigrated to the United States in the late 1960’s.

Homeland Elegies is his second novel and “blends fact and fiction to tell an epic story of belonging and dispossession in the world that 9/11 made.”

What does it mean to be a Muslim growing up in America now?

Like the author, the protagonist of Homeland Elegies is Ayad Akhtar who was born in Staten Island and moved to Wisconsin when he was a boy.

So, we know that part is all fact.

His father was a successful and renowned cardiologist who treated kings as well as people that thought they were kings, or in this case Donald Trump (in the early 90’s, before he was King … ah, I mean President).

Ayad’s father has taken to America and loved all it has to offer; his mother was less impressed and dreamt for the day she could return to Pakistan.

Ayad and his father don’t see eye to eye on things, and one of those things is Donald Trump, who is now the President.

Ayad’s father supported Trump, “The mental contortions he performed to make sense of Trump’s nonsense, which made me wonder if he was going senile.”

And Ayad’s father will hold onto the dream about Trump for a few years until he realises, “Trump was a big mistake.”

Ayad wants to be writer but struggles to make a living and often has to rely on his parents to help him pay the bills.

His aunt tells him, “It’s a hard life. It’s thankless. If you can do anything else with yourself, anything more certain you owe it to yourself and to everyone you love to do that.”

Ayad is smart and tenacious and meets important people.

People that get him connections and also help him to get rich.

He ends up writing a play about a Muslim American that is quite popular and this gets him known.

Soon the shoe is on the other foot and it will be Ayad that is called to help bail his father out.

The Guardian writes “It’s hard to convey the breadth and brilliance of this work. Exploiting his skills as playwright and essayist as well as novelist, Akhtar depicts an immigrant family’s experience of the American dream through a son’s relationship with his father, and dissects the erosion of truth, decency and hope in a nation shaped by debt and money.”

That’s a good summary – it definitely presents a lens into modern American society and the pursuit of immigrants of the American Dream.

Parts of it are thoroughly engrossing, particularly the parts that delve into his Ayad’s evolving relationship with his parents.

I really felt for the struggles he had with his father and feeling distant from his mother.

However, there were other sections that I found were a little too self-indulgent.

However, it was the blending of fact and fiction which confused me.

Not sure why I need to know which is which, maybe I want to know more about Ayad Akhtar and if he actually had the struggles he wrote about. And to everyone who’s wondering where I’ve been the past few weeks – I’ve been right here, reading away, all the time. It’s just that Ross is the world’s worst editor.