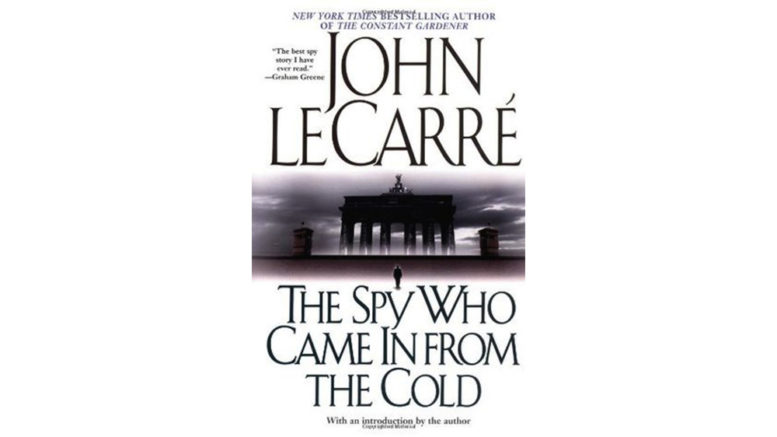 The Spy Who Came in From the Cold –

When John le Carré (aka David Cornwall) passed away back in December there was much talk about his great body of work.

The book that drew most accolades seemed to be, The Spy Who Came in From the Cold.

Commentators described this book as his most popular and was also made into a movie.

I’d never read it, so I decided to broaden my horizons.

One thing I did not expect was it being called “A George Smiley Novel”.

I thought it was a stand-alone book, but it is le Carre’s third novel and the third part of a series in which a character named George Smiley appears.

He is mentioned in The Spy Who Came in From the Cold but only as a minor character and not one that makes much of an impact, not to me at least.

The story takes place during the Cold War – the early 1960s to be precise.

There is a grey, dourness to the setting, before the go-go years of the swinging sixties.

We meet Alec Leamas, a spy, working in East Berlin, trying to get his double agent out when things go wrong.

Alec has been recalled to London, where the headquarters for the Circus reside.

He thinks he will be set out to pasture, but Control request one last mission of Alec, and it is a big one – they want him to get back into East Germany (the German Democratic Republic as it was then known) and frame Mundt, the head of the Abteilung (East German’s spy agency) as a double agent.

We then find he has been fired from the Circus, with only a small pension to rely on.

He finds work at a library and befriends Liz Gold, who is a member of the local communist party.

They become lovers but there is never any promise of a long-term relationship.

Alec remains elusive about his life.

Liz thinks there is more to him but when he asks her to promise not to look for him you know there isn’t a future.

When the local grocer fails to offer Alec credit, Alec belts him in front of witnesses.

This gets him arrested and sent to jail.

He is now a disgruntled spy, which brings him to the attention of the Abteilung.

He is promised a sum of money if he divulges the operations of the Circus.

During the debriefing Alec talks about dropping off payments to various banks around Europe.

This seems to be of particular interest to the members of the Abteilung, who think these payments are for a double agent in their ranks.

Alec is brought to East Germany where he is arrested by Mundt.

Liz is invited to East Germany for her work with the Communist party.

While Alec is on trial, Liz is called as a witness and she blows his cover.

It is at this point Alec realises he has been used pitilessly by his own side in a complex triple bluff.

Time magazine has listed The Spy Who Came In From the Cold in its top 100 novels.

There is no denying the impact this book has had.

I found the plot difficult to follow at times – there are some challenging subtexts to absorb – and I admit to getting a little confused.

I reread some sections multiple times to make sure I had a grasp what was going on.

But it is still exciting.

It leaves you feeling you might need to read it again to uncover some of the intricacies you missed the first time.

Le Carré’s wrote the Spy Who Came in From the Cold from the omniscient narrator point of view.

As such, he retains the right to know all and to enter the minds of any character he chooses, but yet he seeks to manage the flow of information to keep the mystery alive, to avoid the reader feeling duped.

A tight rope to walk, yet he makes it deftly to the other side.

But it is a classic worth reading.