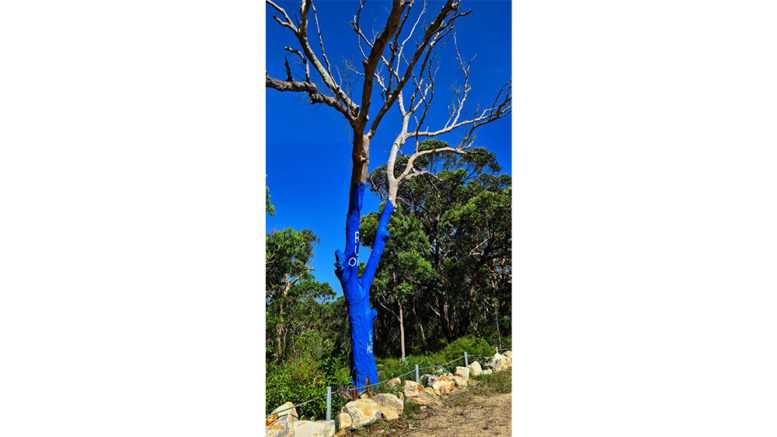 A Blue Tree on Kanangra Dr on the way to Gwandalan/Summerland Point has piqued the curiosity of locals.

The message on the tree says: “Blue Tree Project” and “R U OK” – raising awareness for mental health issues and suicide prevention.

The blue tree on Kanangra Dr was painted by Sharnae Hilton and her family in honour of her stepfather Steve, who sadly took his own life in 2019.

“We decided to look up some charities for suicide awareness to see what we could do to honour Steve, and we came across the Blue Tree Project and got in touch with Kendall (Whyte) who informed us on how we could paint a tree,” Hilton said

The tree in question was chosen by Hilton’s mother, as it stood out to her.

“It was really comforting and empowering to be together as a family, painting the tree to honour Steve.

“We hope that it can be a beacon of hope for the community and that it reminds everyone that it’s okay to have these conversations about mental health,” she said.

Blue trees – all dead trees – have been popping up all over the place in support of the Blue Tree Project which aims to start a conversation and encourage people to speak up about mental health.

It all began in Western Australia in 2019 and was inspired by Jayden Whyte, who painted a tree on his family farm blue.

The trees are dedicated to loved ones who have taken their own lives or are struggling with mental health issues and the Blue Tree Project has now spread all across Australia and around the world.

It aims to support people during the critical three-month period following a suicide attempt when they are at high risk of attempting again.

“As a mental health specialist organisation, we are familiar with the impact that attempted suicide has on the individual, their support networks and the whole community,” said Michelle Bradbury, CEO of Coast & Country Primary Care.

People will be referred from Wyong Hospital and other local hospitals to be assigned a Suicide Prevention Support Co-ordinator guiding them through their recovery.

Co-ordinators offer non-clinical care, such as helping to build a personalised safety plan and linking them to health and community services and clinical care if needed.

The service has been designed by Beyond Blue, commissioned by The Hunter New England Central Coast Primary Health Network and funded by the Commonwealth Department of Health and NSW Health.

Tree of Dreams is a twinkling beacon of hope

Luke Viner – Gone but not forgotten