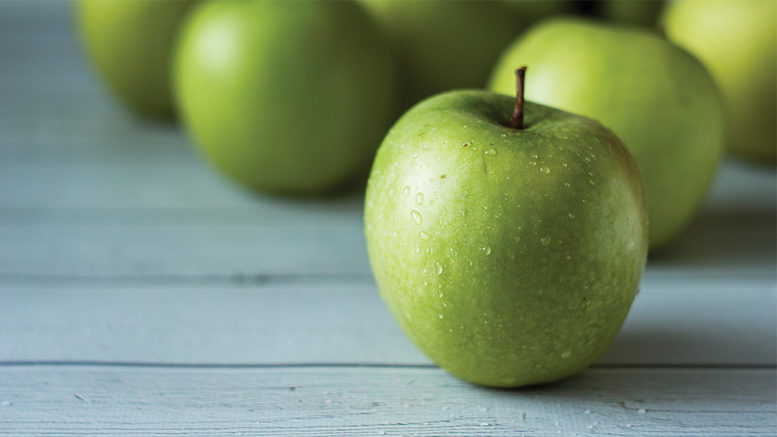 As we continue our focus on what’s in season at this time of year as part of our Autumn seasonal eating guide, it’s hard to overlook one of my all-time favourite fruits: the humble apple.

They’ve been spectacularly upstaged by kale and goji berries in recent times, but there’s a reason that apples are one of the most widely cultivated fruits globally, with such a long history (7,500 years of cultivation and counting!) and so many diverse cultural references. They’re nutritional powerhouses and in fact, now widely considered a medicinal food when it comes to the area of gut-health.

Autumn, the time to indulge

It’s that lovely time of year when crisp mornings start to set in and new season apples are abundant at our local markets.

You may have never stopped to ponder the greater significance of the phrase ‘new season’ when it comes to your fruit and veg. New season produce is the stuff that’s picked at the height of its freshness and flavour. This is when all harvest festivals were traditionally celebrated – that sacred turning point where the fruit is at its peak nutritionally and energetically and is ready to come off the plant.

Think about it. If we didn’t have access to a hundred apple farms growing over several states – if for some outlandish reason we committed to shopping locally, from an orchard down the road – our apples would be harvested in one go, over the space of a week or so.

And we’d celebrate and gorge ourselves and then scramble to preserve the harvest into vinegar and cider, jam and jelly, canned apple sauce and dried apple slices.

Then, that’d be it for the year. No more fresh apples on tap. Imagine the withdrawals! And the intensity of your cravings for that crisp, juicy mouth explosion come Autumn next year. Apple harvest wouldn’t be some kind of quaint, tokenistic festival, it’d be a day of heartfelt celebration.

I may be a romantic, but you can’t tell me we haven’t lost something meaningful, by having everything on tap, all year round! And so of course have our children, with many growing up without any connection to the natural cycles and seasons of nature.

It’s only our artificially propped up system that allows for this in the first place. Australian apples regularly sit in storage for up to twelve months in the big supermarket chains. I daresay there is minimal nutrition left in this fruit.

And on that note, let’s spend a moment talking about how nutritious apples truly are! Perhaps because they’re so widely and steadily available, they are solely underestimated in terms of their nutritional value.

The humble apple is a nutritional powerhouse!

And that’s aside from the fact that it’s now being widely touted – thanks to the legwork of Dr Michael Ash – as one of the most potent gut-healing functional foods available when prepared in a certain way. (Hint: no surprises, it’s the way that grandma used to make it, because previous generations simply had an inherent understanding of how to use food as medicine!)

However, before we get into the cooking, why don’t we touch on some of the remarkable nutritional qualities of this traditional fruit.

Apples are rich in the usual range of nutrients such as vitamin C and potassium, however where they shine (no pun intended) is their impressive phytonutrient content.

Phytonutrients are compounds that aren’t necessarily there to nourish us, but still have a very beneficial effect in the body in terms of disease prevention, regulating our immune system and repairing DNA damage.

Apples are particularly rich in a powerful group of phytonutrients known as polyphenols. These are antioxidants found in high concentrations in red wine and green tea and other fresh fruits and vegetables.

Quercetin is the main polyphenol in apples and predominantly found in the skin, along with the highest proportion of fibre and minerals, so best not to peel your apples, providing they’re organic. Organic apples have also been found to have a higher concentration of polyphenols and nutrients across the board.

Apples, along with onions and garlic, are one of the richest food sources of quercetin – a potent antioxidant and anti-inflammatory agent, which helps reduce inflammation in the linings of both the gut and lungs. So, it’s a fantastic nutrient for those with digestive issues and upper respiratory conditions like asthma.

The benefits of soluble fibre and prebiotics

Apples contain soluble fibre and in particular a type called a prebiotic. Prebiotics are indigestible fibres that promote the growth and activity of beneficial gut bacteria. So, in essence, prebiotics feed our gut bugs rather than feeding us.

And in turn, those beneficial bacteria perform diverse roles such as regulating our immune system (which is predominantly housed in our gut), producing vitamins and improving our absorption of the nutrients we consume.  The perfect symbiotic relationship – if we care to feed them!

Supplementing with different prebiotic powders like inulin and acacia gum has become all the rage in the gut healing community, however pectin is often somewhat overlooked.

There’s no doubt that prebiotic powders are beneficial, however as someone with a strong bias towards real food, it’s comforting to know there are equally beneficial types of fibre found in raw carrots and cooked apples which both have similar therapeutic effects on gut-health.

Several studies have demonstrated that the more often we eat these two foods, the less ‘overactive’ our immune system becomes, reducing the incidence of atopic conditions like allergies, eczema and asthma. Others have demonstrated that apples can even reduce inflammation in the brain via their beneficial effect on the gut (no surprises when you understand the significance of the gut-brain connection).

Firstly, they protect against ‘leaky’ gut by reducing inflammation and improving the integrity of the gut lining. They also bind to toxins excreted by any pathogenic bacteria which happen to be residing in our gut – toxins which are generally more harmful to our health than many of the environmental chemicals we’re exposed to – ensuring that they’re easily excreted.

I love how much of the current research is confirming the merit of such ordinary, traditional practices in the kitchen. Isn’t it nice to know that stewed apples with cinnamon isn’t merely a comfort food?

Whenever we cook apples the way that grandma did, to the point that you see a nice shiny sauce, it means the gut-healing pectin has been released. And the traditional accompaniment of cinnamon – which itself a potent anti-inflammatory agent – is a wonderful aid in counterbalancing the potential impact of the fruit sugars on blood glucose.

This is such a simple technique and exact measurements aren’t needed once you’ve got the hang of it, however start with:

1. Give the apples a quick rinse and core them (peeling is optional)

2. Cut them into large chunks and place them in a large saucepan with the water, cinnamon and salt.

3. Cover and cook on very low heat for around 15 minutes, stirring occasionally until they’re soft and there is a sheen to the sauce.

Enjoy them on their own, with butter or ghee stirred through, blended into applesauce for a gut-healing snack that children will love or topped with granola and yoghurt for breakfast.