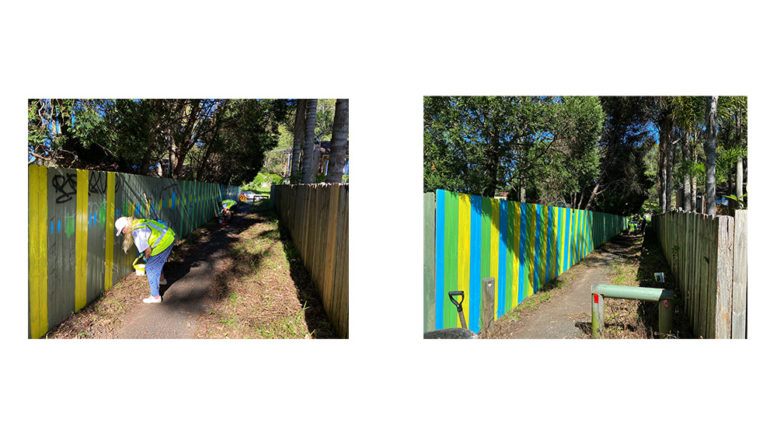 A small army of volunteers was out and about with their cleaning buckets on Sunday, March 28, to rid the northern suburbs of the graffiti scourge, and in particular, seven hotspots in the Wyong area.

“We removed graffiti around Wyong as part of the day and we were encouraging people to reconnect by not only removing ugly graffiti but also working together to come up with ways to prevent graffiti,” said local co-ordinator, Wayne Ballard.

Some ideas that are being thrown around to prevent further graffiti include creating murals, planting trees and educating people to report graffiti.

Ballard said that Graffiti Removal Day was a great opportunity for people to go beyond their front fence and reconnect with the community, especially after the long periods of isolation due to COVID-19.

“It’s clear that throughout the pandemic, most people spent time taking pride in their homes and gardens,” he said.

“Where we live also extends outside our front fence into our local community.”

Graffiti Removal Day was established as a statewide event in 2012, and since then volunteers have removed 141,000sqm of graffiti, which is about the size of 20 football fields, and saving the NSW community $10.4M.

Ballard, who is a part of the Wyong/ Tuggerah Rotary Club, was inspired to start a Graffiti Removal Day here on the Coast after he heard about it from Windsor Rotary Club.

Across NSW, 500 sites were cleaned up by 3,000 volunteers, the event was sponsored by the NSW Government, Dulux and Southern Cleaning Supplies.

Graffiti Removal Day is also running a competition to find the best mural in NSW, with a first prize of $1,000.