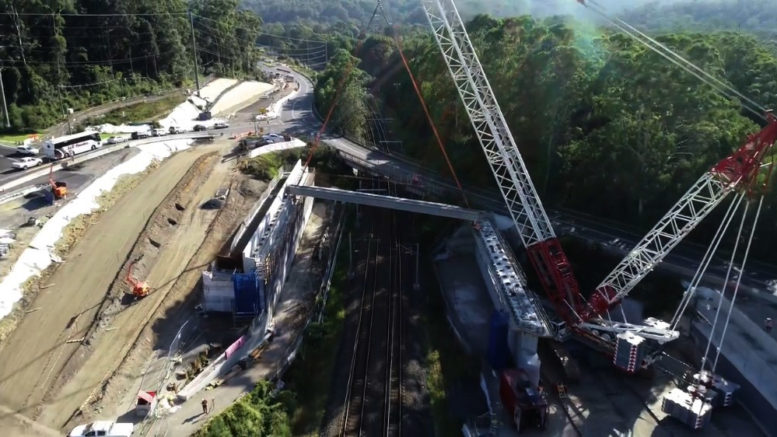 The duplication of the Pacific Highway at Lisarow is powering ahead with concrete girders for a new rail bridge lifted into place over the weekend of March 13 and 14 to help improve traffic flow, travel times and safety.

Twenty seven girders were loaded at the northern compound on the Pacific Highway using a crane and transported along the highway on oversized trucks to the new bridge, where they were installed using a 600-tonne crane.

A crew of more than 70 workers was needed over the weekend and on Monday to install these girders in a complex operation while the rail line was closed for regular maintenance.

The duplication project has provided work for about 1,000 people since work started about two years ago, including more than 150 different suppliers and contractors.

The concrete girders were lifted into place starting early on Saturday morning and crews worked around the clock to ensure that work was completed by the time the rail line was due to reopen.

The $178M project will provide two lanes in each direction on the Pacific Highway between Ourimbah St and Parsons Rd for its 30,000 daily users.

Work is also underway to install traffic lights at the Railway Cres and Macdonalds Rd intersections, as well as better parking access at Lisarow Railway Station.

In mid-2021, traffic will be shifted on to a new section of The Ridgeway so that work to widen the intersection can occur.