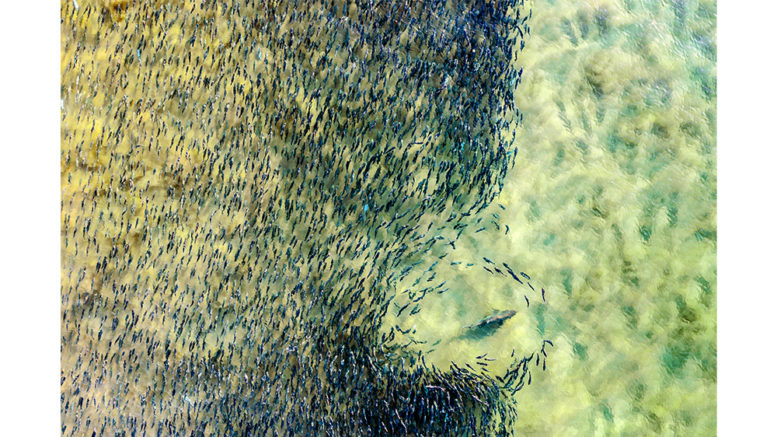 Woy Woy resident, Brendan Abbott, has been awarded second prize in the Australia-wide aerial photography competition, SkyStock, for his image of a rare moment in nature near Avoca Beach.

The photograph, part of the Nature and Environment theme, is a bird-eye-view shot of a school of salmon circling a grey nurse shark near the shallows of the beach.

His photo was selected as one of five winners from 10,000 entries.

Abbott said he took the photo at the end of last year when there seemed to be many large groups of salmon in the area.

“I was actually going out to surf that morning, but it was pretty flat, so I pulled my Mavic 2 Pro out of the car to do a beach run, Abbott said.

“I found this large bait ball of Australian salmon and followed it for a while.

“Then, from what appeared to be out of nowhere, this shark glided in from the deep, and I tracked it for about 20 minutes.

“I’ve always wanted to film a shark around a bait ball and lucked onto this on this particular day.

“I didn’t end up surfing that day either.”

Abbott had lived on the Peninsula for three years now and said his love for drones stems from when he was young.

“I’ve been into remote-controlled planes ever since I’ve been about 10, so pretty much my whole life,” he said.

“Before this, I was in Cronulla in a commercial drone business for five years.

“Then I got into drones and cinematography.

“I do a bit of everything; I just shoot anything that catches my eye.

Guest judges were from a range of leading drone and aerial businesses, which also donated to the prize pool.

Abbott received $200 cash and two copies of the Pippa and Dronie book; one he gave to his daughter and the other he donated to her school.