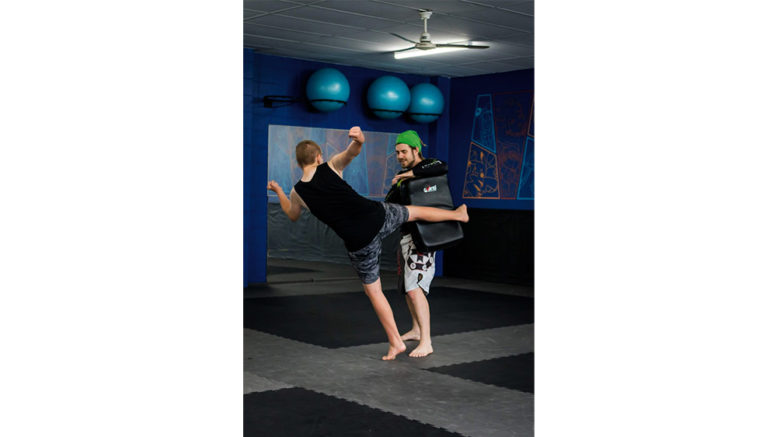 Tony Carter is the man behind Warrior Centre, the Coast’s only martial arts school and physical fitness gym dedicated to working with children with disability as well as those who’ve been the victim of bullying.

Believing his school to be breaking the mold when it comes to children’s martial arts, the all ages all abilities centre is the realisation of a lifelong passion for Carter, who is a state and national titleholder through the IBF, ISKA and IMAT.

Carter is also legally blind and has been since birth, with Warrior Centre his way of giving children like him the chance to learn martial arts in an encouraging environment.

“I actually got into martial arts because I was bullied a lot as a kid for being blind.

“Since I couldn’t fight back there was a lot of physical bullying, pushing, hitting, stuff like that, but it all came to a head when I was 8 and got assaulted by a group of high schoolers with my own cane.

“They beat me with it until my head split open and basically left me in the gutter to die, but thankfully a passerby was able to get me help.

“After that I was too scared to use my cane, so in a way those bullies robbed me of my freedom, because I couldn’t get around without it,” Carter explained.

Not wanting to live his life in fear, Carter decided he wanted to learn martial arts for self-defense, but finding an instructor willing to take on a legally blind 8-year-old proved a hard task, and it wasn’t until he was 11 that Carter found a Sensei who saw more than his impairment.

Taking to his lessons like a duck to water, by the time he was 13, Carter’s outlook on life had completely changed.

Confident in his ability to defend himself should the need arise, his training had also helped him achieve a new level of spatial awareness and subsequently, his ability to move around uninhibited, a change that drastically improved his sense of self-worth and quality of life.

But frustratingly for Carter, the same perceptions that made it hard for him to begin training at all continued to hold him back.

“I got good very fast, so the next step for me was to compete in tournaments, but I was told I wasn’t allowed to due to my vision impairment.

“After pleading my case and still getting knocked back, my instructor actually entered me in a local tournament under a false name.

“I went on to place first in all of my events and after the truth was discovered there were no more issues with me competing on the tournament scene,” Carter said.

At age15, Carter would win his first NSW title, and from there he’d spend over a decade competing at the state and national level, going as far as to qualify to represent Australia at the 2018 World Pankration titles in Rome, but he was unable to compete due to injury.

Also well known in the Newcastle restaurant circuit as the country’s first legally blind chef, Carter knows firsthand how lifechanging a hand up can be to a child navigating disability.

“I’ve been doing martial arts for 21 years now and I love it.

“Getting to work with kids who’ve been turned away from everywhere else because of a disability or because they don’t fit in, is incredibly rewarding.

“I try to teach them that they shouldn’t see their disability as a barrier, because if there’s one thing I’ve learned in my lifetime it’s that anyone can achieve the things they want if they work for them.

“I’m supposed to be walking around with a cane and a guide dog, but I’m not because of martial arts and that’s what I want for the kids that come to Warrior Centre,” Carter said.

Likewise, Carter believes children with low self-esteem due to bullying can get just as much out of his program, which focuses wholly and solely on developing confidence through self-defense.

“At Warrior Centre, the approach is very different to other martial arts schools because all of my lessons are delivered in the form of games.

“These games cover the basics of self-defense without aggression, because I don’t believe teaching kids who are being bullied how to fight is going to help them.

“Rather, my program focuses on teaching them how to defend themselves with a focus on controlling the situation, avoiding confrontation, and in the worst case scenario, restraining an aggressor and calling for help, because violence is never the solution.”