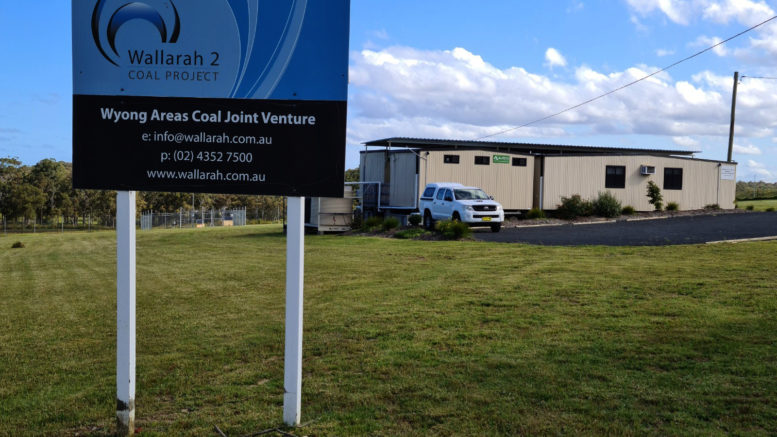 Headquarters for Wallarah 2 mine on Bushells Ridge Rd

Korea Resources Corporation is planning to sell its 82.25 percent stake in the Wallarah 2 coal mine, as part of efforts to cut its debt totalling $6.1B as of the end of June 2020.

It was reported in The Korea Economic Daily on January 6 that the government owned corporation had called for bids on a stakehold in the Wyong Areas Coal Mine Joint Venture, to comply with South Korean government instructions to offload all its overseas assets as soon as possible.

“It hired law firm, Lee & Ko as the sale manager, and will receive bids until the morning of April 22, according to the company and industry sources on January 5,” the article said.

A Korea Resources official said in the article that in the sale process, SK Networks and Kyungdong might offer their shares as well.

The Korea Economic Daily reported that since last year, the South Korean ruling party had been seeking to ban its state run institutions, such as the power corporation, from financing foreign coal power projects.

South Korea’s parliament looks set to pass new legislation to ban financing on foreign coal power projects, however, the proposed Bill has not yet passed through the parliament.

The rapid transition away from fossil fuels overshadowed the outlook for global coal demand which could lead to a drop in the Wallarah 2 coal mine’s selling price, the article said.

A Korean resource industry spokesperson voiced opposition to any hasty sale of the mine, according to the article.

“The Wyong mine may be difficult to sell at the right price, but given its productivity, we may need to think about how to utilise its resources directly,” the spokesperson said.

Wallarah 2, with 1.2 billion tons of thermal coal, has approval for 28 years to extract up to five million tons per annum from its underground longwall mine.

Its location in the main water catchment area for the Central Coast, as well as other significant environmental factors, caused strong community opposition and there has been a concerted campaign led by the Australian Coal Alliance right through to the Land and Environment Court.

The Federal Government approved the mine in 2018 but with hundreds of conditions aimed primarily at protecting the environment and water quality.

Wyong MP, David Harris, said indications were that the Koreans were now wanting to remove themselves from coal mining in the longer term.

“I’ve always believed that the application for Wallarah 2 was always about getting the licence and that they always intended to sell,” he said.

“If the shares are sold then whoever buys them should have to undergo strict compliance regulation because of the large number of conditions that have been placed on this mine.”

He said the federal and state governments would have to ensure that the purchaser actually had the ability to meet all the conditions, and if they didn’t, that meant then that the licence could be withdrawn.

“We’d have to make sure that all of the promises that Kores has made in their application can be 100 percent honoured by whoever took it over.”

Harris said the government had the capacity to terminate the licence if the new shareholder was a mining company with a terrible environmental record of leaving terrible legacies in communities.

“The community has the expectation that if the licence is sold, then the purchaser will be able to meet all the terms of the conditions set,” he said.

Following inquiries to the NSW Department of Mining, Exploration and Geoscience, Deputy Premier John Barilaro responded by saying that any internal changes in ownership arrangements for the Wallarah 2 mining lease held by Kores Australia Pty Ltd, was a matter for the proponent.

Several attempts to contact the Wallarah 2 mine Manager, Ken Barry, before publication were unsuccessful.