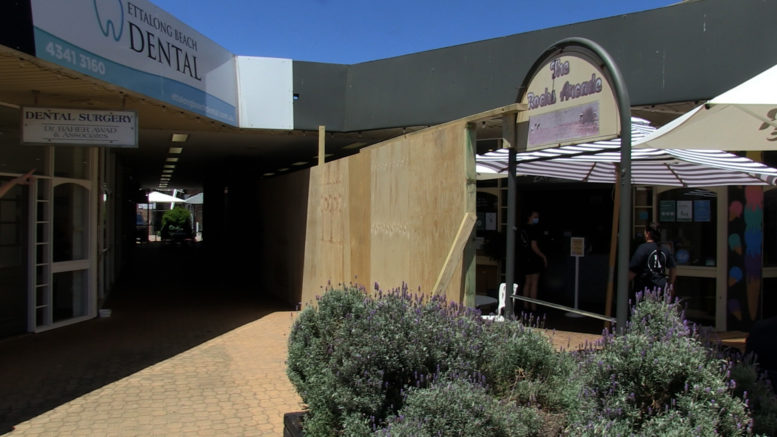 The wall at the Rocks Arcade

Central Coast Council has described the mystery wall constructed in the centre of the Rocks Arcade at Ettalong Beach as a “temporary construction site fence”.

Several tenants and shop owners arrived at the Memorial Ave arcade on January 20 to find an unexplained 3m wall had been built overnight.

Mars Property Group, developers of the Atlantis residential apartments at Ettalong Beach, lodged a Development Application to demolish half of the arcade and build a five-storey hotel—with construction costs estimated at $18.58M.

A Central Coast Council spokesperson said the DA was approved on May 11, 2020, and a temporary construction site fence was required before works could commence.

“The approved development consent for the hotel development states that prior to commencement of any works, the applicant must erect a temporary hoarding or temporary construction site fence between the worksite and adjoining lands before the works begin,” the spokesperson said.

“(This site fence) must be kept in place until after the completion of the works, if the works could cause a danger, obstruction or inconvenience to pedestrian or vehicular traffic; or could cause damage to adjoining lands by falling objects— or involve the enclosure of a public place or part of a public place.”

The spokesperson also said that a separate DA was not required to construct a fence between the worksite and adjoining land.

Helado café owner Chris Perkins said they assumed the wall had been constructed to impact their business and push them into moving out.

“The only motivation that we can see for its construction is to make it look like we are closed or to make us invisible from passing trade,” Perkins said.

“We have over two years remaining on our lease and have full access to use that part of the arcade for our tables and chairs.

“We are not closing down, and we have no intention of moving.”

Mars Property Group reached out to Perkins and other tenants who were told the temporary wall was there to mark their boundary; Perkins has requested extra clarification on this and is waiting for a response.