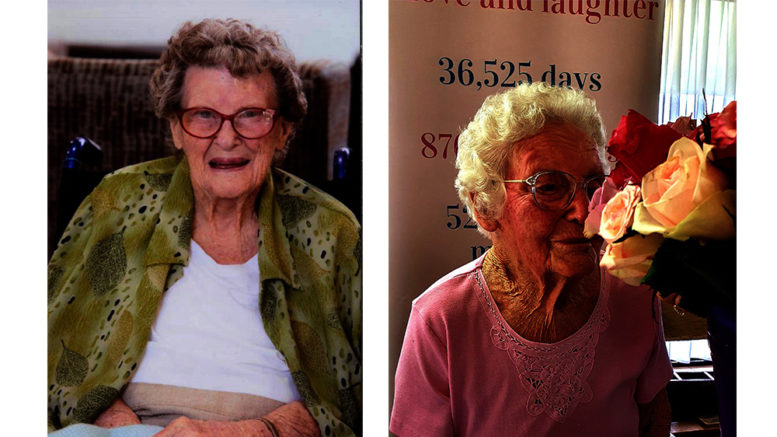 An aged care provider at Umina Beach has welcomed a new trio of centenarians to its 100 club.

And with celebrations now winding down, Doris and Hazel have taken the time to reflect on their lives and how much the world has changed over the course of 100 years.

“Life was much simpler for us when William and I were raising our two children – technology was nowhere near as advanced, with just had the radio and the odd ‘talking picture’ as entertainment,” Hazel said.

“Time together was spent playing games and enjoying each other’s company.

“Some of my fondest memories are of our holidays on the Hawkesbury River, swimming and fishing with the family.”

Doris shared her experiences of growing up in Sydney.

“In the lead up to World War II, times were really difficult for many families and so I left school at 14 to help look after my younger sisters at home,” she said.

“I never returned to school as supporting the family took precedence, so instead I went to work at the GPO in Sydney as a typist and stenographer where I was crowned the Mail Branch Queen at a ball they held.”

The pair agreed that the secret to a long and happy life was not to sweat the small stuff.

“Ninety percent of the things you worry about won’t even happen – it’s a waste of time and energy,” they said.

“Just focus on the now and enjoy every moment with those you love.”

Peninsula Villages Chief Executive Officer, Shane Neaves, said it was wonderful to welcome the trio to the centenarians’ club.

“We are seeing many more residents reach this milestone than we did 15 to 20 years ago due to advances in medical technology, more personalised treatment options and a subsequent improvement in the practise of medicine itself,” Neaves said.

New Shared Zone for The Esplanade at Umina