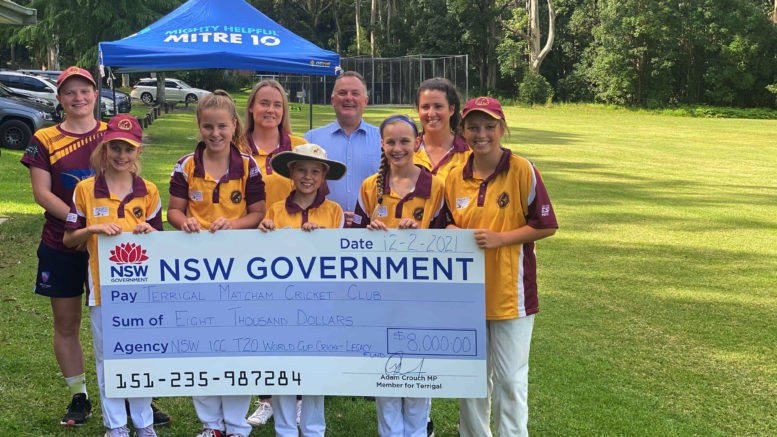 The New South Wales International Cricket Council T20 World Cup Cricket Legacy Fund has awarded an $8,000 grant to Terrigal Matcham Cricket Club in aid of the club’s improvement of its equipment and opportunities for women’s and girl’s cricket.

The money comes in response to the reported rising interest in women’s sport on the Central Coast.

For Terrigal Matcham’s President, Andrew McFadden, this means more funds to put towards kitting out their club with the necessary playing and training equipment and personnel, moving closer to a larger vision of growing their senior squad from one team to three.

“In our club and on the Coast, women’s cricket is going from strength to strength, and these grants are absolutely critical to keeping that growth going,” said McFadden.

“Most of the girls and ladies who come to play cricket with us have no gear, so the idea is to make sure that they are kitted out accordingly with all that they need.

“The money will largely go towards supporting whatever we can do to keep that growing number of girls increasing.”

The funding was secured in aid by Parliamentary Secretary for Central Coast, Adam Crouch, who commended the club’s efforts in improving the participation of women in the sport:

“This funding from the final round of NSW ICC T20 World Cup Cricket Legacy Fund will see grassroots cricket made more accessible for players of all ages and abilities.”

“Through the wonderful generosity of the NSW Government, $6M in grants has been distributed to clubs and councils right across NSW to support participation growth and leave a lifelong legacy for our cricket communities”, Germon said.

“The past two rounds of the Fund have had an incredible impact on cricket in NSW and this final round will be no different.”

Spruce up for Patonga hall

Folk club back with some great events