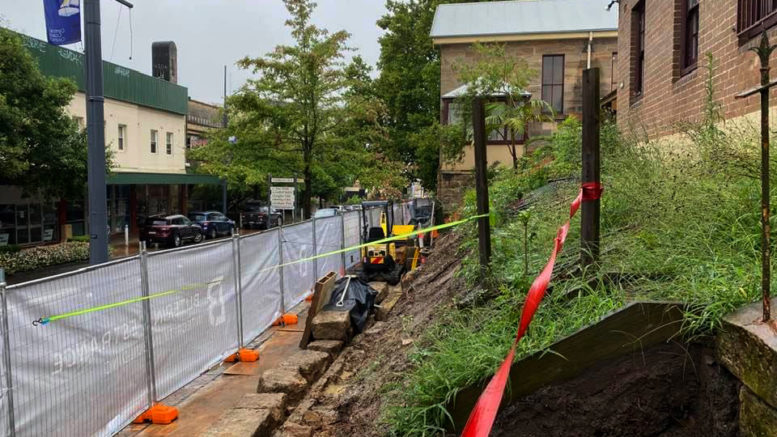 Work is proceeding on restoring the sandstone fence outside the Con

Central Coast Conservatorium is all set to proceed with Stage Two of its major refurbishment, with a Development Application (DA) now with Central Coast Council.

Stage One of the revamp, made possible by a $2M grant from the State Government in 2019, is still in progress.

Conservatorium Vice President and Chair of the Building Committee, Claire Braund, said much of the Stage One work, which included re-roofing, some re-flooring and interior upgrades, work on the Robert Knox hall and the restoration of the sandstone wall at the Mann St entrance, was well underway.

“The restoration of the sandstone wall has been a major thing,” Braund said.

“When we took it down, we discovered it had no foundations, so it had to be re-engineered and reworked.

“Also, because the wall is heritage, all the blocks had to be taken out in order and must be replaced in order.”

When work is finished, the Robert Knox hall will have fixed tiered seating, including disability seating, for 77 people.

Stage Two of the works will see improved disabled access from the rear of the Con in Georgiana Tce.

“We will also need to shore up the wall between us and the Council block next door.”

The Stage Two works, to cost $728,035, will also include alterations to the foyer and reception.

Braund said the proposed sale of the Council-owned block to the rear of the Con would not impact Stage Two works, but the Con was in negotiations over a re-think on the sale, mooted under Administrator Dick Persson’s proposed asset sale list.

It currently houses several demountable buildings which are in use by the Con as well as a timber cottage divided into four studios, a storage area and bathroom and a stairway and ramp joining the cottage to the carpark at the rear.

“We have made representations to the State Government and to Council, which have been well received, and I have had positive reassurances that the Con won’t be hung out to dry,” she said.

The building is considered to be one of the Central Coast’s most important and oldest structures, starting life as a courthouse and police station.

It is noted as an item of Local Heritage under the Central Coast Council LEP.

The report says the proposed works will “prolong the life of one of the Central Coast’s most important historical buildings”.

Documents lodged with the DA say the building is of exceptional significance as one of the earliest remaining complexes of public buildings in the Brisbane Water region and an important symbol of the early imposition of European values and laws on the local Aboriginal population.

“It is particularly noteworthy as the work of two of the most important and long serving colonial architects, Mortimer Lewis (1835-1849) and James Barnet (1862-1890), and demonstrates the high quality design and use of materials characteristic of the work of the office of the Colonial Architect,” the documents say/

With the plans on public exhibition until February 15, Braund said she was confident the DA would be processed quickly, with completion of work expected mid-year, weather permitting.

She said all contractors employed were local.

“All the tradespeople have shown tremendous commitment- I think they like working on such a significant building,” she said.