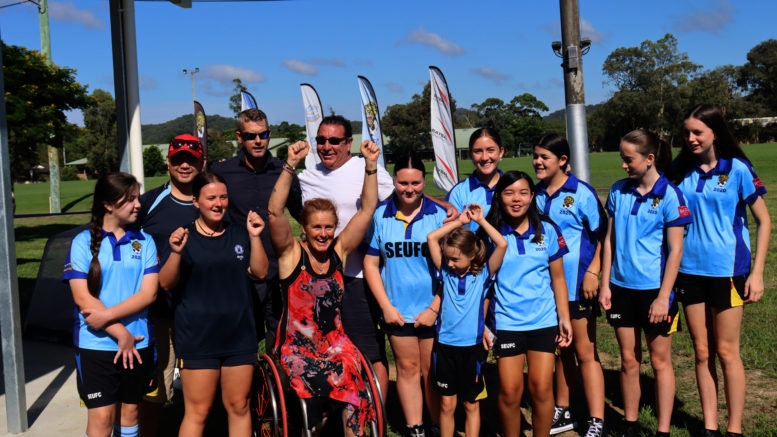 Southern and Ettalong United Football Club’s renovations on its clubhouse at James Brown Oval, Woy Woy, have now concluded following a five-year project aimed at providing necessary infrastructure for the growing number of club players, particularly within the girls’ and women’s teams.

On Friday, February 5, the club officially opened the new and improved clubhouse, a few months prior to the football season kick-off.

In attendance were representatives from a wide array of financial supporting partners and regional and state football governing bodies, Member for Gosford, Liesl Tesch, and Federal Member for Robertson, Lucy Wicks, as well as a group of young female footballers who play with the club.

The honour of cutting the ribbon was given to ex-Matilda football player, Servet Uzunlar, who reflected on the role of a changeroom in building team culture.

“The changeroom is an important part of a club that builds a team environment,” she said.

“I know the girls will enjoy a space where they can come and feel comfortable.

“It’s their space for 20 – 30 minutes to get ready, to have jokes, to put some music on, to do whatever they want to do and then go out and play.

“The facility looks awesome and the signage is wicked!

“It has a really nice vibe to it and I’m sure these girls are going to enjoy it.”

Tesch took the opportunity to speak directly with the girls about how competitive female sport teaches many life skills as an individual and team player, and reflected on the importance of female participation and equity in sport.

Wicks also noted with excitement the growth of women’s football on the Coast.

“It’s fantastic to see that as this interest grows, we can actually build the infrastructure that’s needed to make sure our women, our young girls, our soccer stars of the future, get access to everything they need to succeed,” she said.

Southern and Ettalong FC will now look forward to its first big sporting challenge of 2021: the Pre-Season Cup to be held throughout March, where their top men’s and women’s teams will compete for gold.