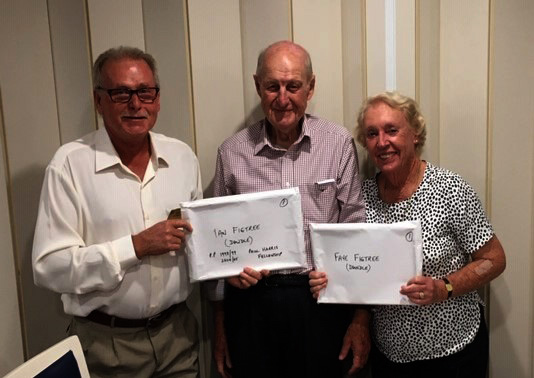 Publicity Officer Pat Lewis said the club’s faithful service and leadership, to the Peninsula community and beyond, was marked with a special evening of celebration where several members were awarded.

“During the evening, several members and ladies were rewarded for their loyalty to the club with the award of an OBE (Over Bloody Eighty) —which delighted many,” Lewis said.

“We were delighted to hear that the late Geoff Melville, a long time stalwart of our club, had been awarded a much deserved OAM in the New Year’s Honours list.”

Lewis said despite COVID-19 restrictions last year, the club had remained active in the community.

The club helped to repurpose 50 hospital beds from Peninsula Villages to areas of need in the Pacific, partnered with the Rotary Club of Woy Woy to donate audio headsets to Peninsula Villages, and provided camping gear to agriculture students at Brisbane Water Secondary College.

Several agriculture students were also sent to the Armidale University for further learning and experiences by the club.

Other community initiatives included collecting groceries for Mary Mac’s Place, travelling to Forbes to spend and support local businesses and supporting Dominic Hall for his Rotary Exchange in Slovakia.

“The club would also like to thank the enormously generous local residents who regularly place their small change in our donation boxes throughout the Peninsula helping us to continue our service works,” Lewis said.

“We would like to sincerely thank our community for its ongoing support as we work to do good things for the people of the Peninsula.”

Community outreach projects ‘in the bag’