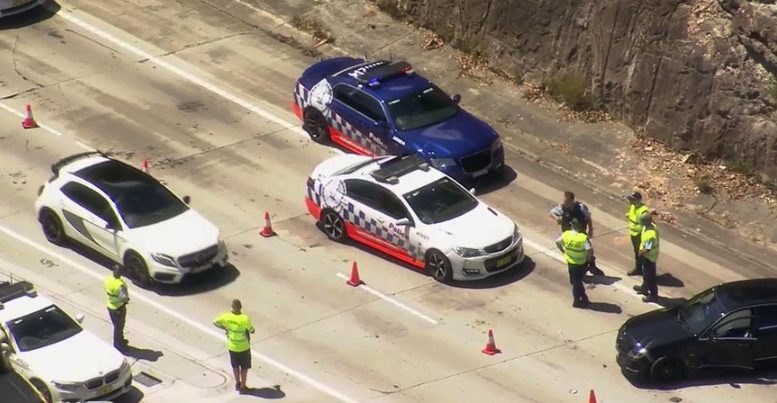 The scene at Kariong Photo: Channel 9

A man has now been charged following a police pursuit on the Central Coast on Thursday, February 11, that’s left a police officer with a fractured wrist and facial injuries.

Police will allege in court that at about 11am, officers attached to Lake Macquarie Police District attempted to pull over a black Mercedes on the Pacific Highway at Murrays Beach.

The 26-year-old male driver failed to stop and a pursuit was initiated.

The vehicle continued south on the Pacific Highway and on to the M1.

At the Kariong exit on the M1, the Mercedes crashed into two police cars injuring a male Senior Constable attached to Central Coast Highway Patrol.

The officer was treated at the scene before being taken to hospital where he underwent surgery for a fractured wrist.

The Mercedes was searched and officer allegedly found a knife and a small amount of methamphetamine.

The driver of the Mercedes was arrested and taken to Gosford Police Station where he was charged with police pursuit drive dangerously, disqualified driving, resist arrest, drug possession and possess knife in a public place.

He was refused bail until his appearance in Gosford Local Court.

As inquiries into the crash continue, investigators are calling for anyone who may have dash-cam vision of the pursuit to come forward.