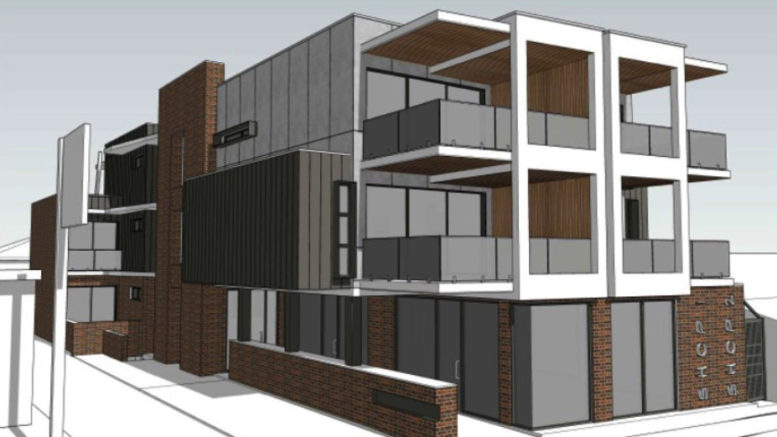 A perspective drawing of the affordable housing project at Toukley

Plans for two retail premises and nine residential flats on a narrow block at Toukley, which is strongly opposed by the local community, will go before the Central Coast Local Planning Panel.

The Panel meets on Thursday, February 25, and the proposal has been recommended for refusal by Central Coast Council.

Vehicles coming and going from the proposed development will be from a neighbouring property, number 141, directly on to Main Rd, which residents say is a major concern, considering the already congested and heavy traffic flow on Main Rd.

Plans are to have the community housing provider, Compass Housing, manage the residential accommodation.

The development application (420/2019) was submitted by BACAD Design on behalf of the owners N and M Mamanidis.

It has gone to the Local Planning Panel for a decision as the proposal seeks a variation to the development standard that exceeds 10 percent.

The site is zoned B4 Mixed Use under Wyong Local Environmental Plan (LEP) 2013 which makes provisions for residential flat building and commercial premises, and it has a height limit of 8.5m.

A Council staff report says this proposal has a maximum height of 11.3m to the lift overrun and feature parapet and 10.44m to the remainder of the parapet.

“The proposal does not comply with the building height provisions of the LEP,” the report says.

“Planning controls do not anticipate development of three storeys in this location.”

Apart from the height, the bulk and scale of the building are not compatible with the area, the report says.

The report to the Panel says that the proposal does not impede neighbouring amenity in regard to solar access, privacy or views, but it does have an impact because of its visual bulk and its incongruous relationship to existing and future development of adjoining sites.

It says in the report that the applicant hasn’t provided sufficient grounds to justify the variation in height limit which is not consistent with the objectives of the development standards and therefore not in the public interest.

Also, the proposal does not meet the minimum residential car parking requirements, with only five, but complies for the retail component with four spaces provided.

The report says there is no parking for a variety of modes of transport and plans do not demonstrate function and safety of the vehicle access to and from the development.

Transport for NSW has recommended that vehicles be restricted to left in entry and left out exit and a concrete median to be constructed on Main Rd to prevent right turns into and out of the property.

The site has been vacant for many years after demolition of an old house and more recently used as an unofficial unpaved car park.

It is adjacent to a site now used as a car washing business that was once a service station and there is a risk of aged migrated contaminants from underground petroleum storage tanks.

Sampling taken as part of an environmental site assessment detected asbestos and hydrocarbons, therefore, remediation and site validation are required to make the site suitable for the proposed use.

There also is potential that the site contains acid sulfate soil which would require treatment.

The applicant has submitted a Remediation Action Plan including excavation and offsite disposal of the contaminated layer located in the soil up to one metre below ground level.

Council’s report said there were no other contamination concerns that would prevent the site from being utilised for its intended use, subject to instigation of the Remediation Action Plan and appropriate validation by a suitably qualified contaminated land professional.

The report says the development was likely to have positive economic and social impacts through suitable small business premises, affordable housing, jobs during construction and a well serviced location, however, the excessive height of the building and its unacceptable bulk within the existing streetscape led to a recommendation to the Local Planning Panel to refuse the development application.

Does Council respond any better than Planning Panel?

Colour palette in harmony with bush