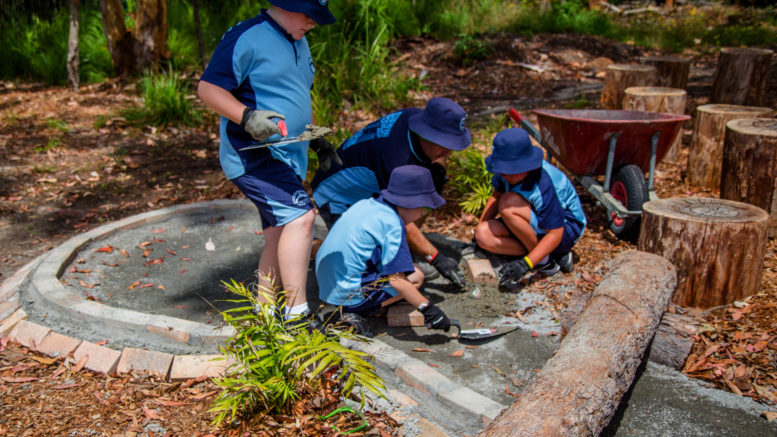 Relieving Principal, Dale Edwards, said the new playground was a first for Blue Haven PS and one that staff were proud to be working hand in hand with students to deliver.

“Last year we asked our Student Parliament what new play areas they’d like to see and since then they’ve been involved in the planning, design and creation of the sensory playground,” Edwards said.

“They’ve even helped with age appropriate construction duties and the whole process has really helped get students excited about the project and inspired a real sense of ownership and pride amongst all the kids involved.”

Made almost entirely from natural materials, the new playground is set to include several hands on free play features that Edwards said weren’t available in the school’s other play areas.

“Some of the new features coming include a timber building area where the kids will be able to make their own freestanding structures, a pebble river and bridge, a soil pit (think sandpit but with soil) where they’ll be able to play with toy cars and trucks, and sound tubes that will let students talk to each other from across the playground.”

The space is also set to include an outdoor classroom component, something Edwards said teachers were especially excited about, given how many features of the playground lend themselves to the science and technology syllabus and general problem solving based learning.

Edwards said the playground would also boost the number of resources the school could offer to its students with additional needs, with the space to be utilised as a place for quiet reflection and self-regulation for students who need it.

“One of the things we’re most excited about with the sensory playground is giving our students with additional needs a new space to learn, play and self-soothe.

“This also extends to kids who might just be having a hard day, who’ll be able to access this space to refocus and get themselves back into a headspace that’s ready for learning,” Edwards said.

While there’s currently no finish date on the project, Edwards said the school was hopeful it would be completed and officially named before the end of the current term, with a grand unveiling to follow once circumstances allow.

“We would love to welcome our school community onsite to see the new sensory playground once its completed, but an event like that will be subject to COVID-19 regulations.”

Grand opening or not, Edwards said the playground would be open for students to enjoy as soon as works were complete.

Down In The Garden: Getting To Know Your Pollinators

Down In The Garden

Down in the Garden: Pet Safe Gardens