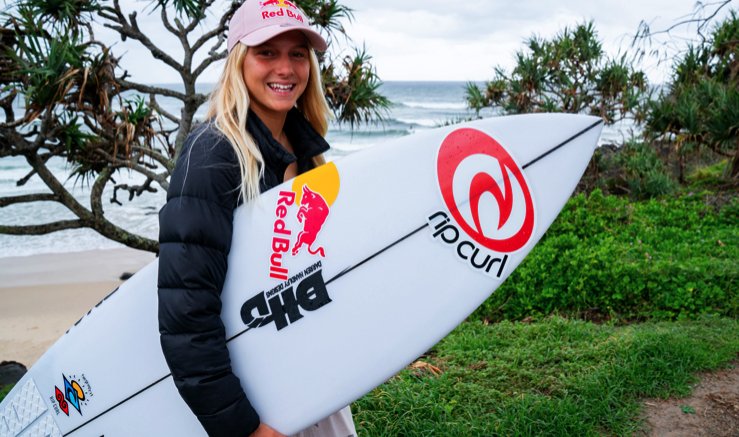 Molly Picklum with her new Red Bull board and cap, presented to her by surfing icon, Mick Fanning

Central Coast local, Molly Picklum has been officially welcomed to the Red Bull surfing team by Australian surfing icon, Mick Fanning, who presented her with a new sponsored surfboard.

The 18 year old Shelly Beach resident from Gosford has many surfing accolades to her name already in the early stage of her career, with two back-to-back Australian Championship Titles in the under 16’s, then under 18’s, and an Australian Pro Junior win in 2019.

Molly was also named the Female Rising Star at the Australian Surfing Awards in 2020.

Now joining the Red Bull team, Molly continues to prepare for the World Surf League Qualifying Series, which kicks off at Boomerang Beach between 16-19 February, and she is also the wild card entry for Rip Curl Pro surfing event at Bells Beach, Victoria, in April.

“I am so excited to be part of the Red Bull family,” she said.

“The support Red Bull gives me makes a huge difference to my performance.

“I am only early days in my surfing journey, but the Red Bull team go above and beyond to help me achieve my goals.

The occasion of Molly’s swearing-in-of-sorts with Mick Fanning was marked by a quick ceremony, followed by the two taking up their Red Bull boards and heading out together for a surf.

“Getting my hat from Mick and having a surf together today was pretty special.

“I feel lucky to be on a team with incredible athletes like him,” she said.