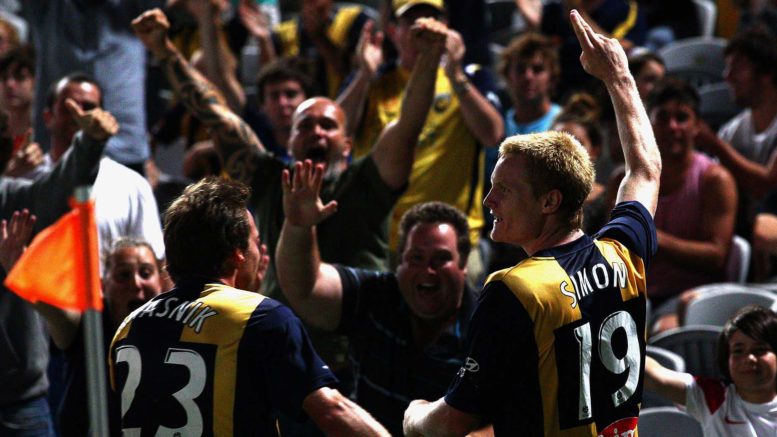 Matty Simon kicks an equalizer in his 200th match

The occasion of captain Matt Simon’s 200th game for the Central Coast Mariners has been marked with an exhilarating 3-2 win against Melbourne City at Central Coast Stadium on Wednesday, 03 February.

The Mariners came from 0-2 down to win the game, including a thrilling penalty from the skipper.

The history of this fixture pointed towards a high scoring game, with a total of 30 goals being scored between these two teams in their previous seven matches at Central Coast Stadium.

And, indeed, history repeated itself, with 3 goals in the first half alone: two going to the away side before the Mariners pulled one back close to half time and then scoring two more in the second half to win the game.

With the opening quarter played as a midfield stalemate, the first big chance broke for De Silva, set up by Simon, but was turned away by City goalkeeper, Tom Glover.

However, cracks started to show early on in the Mariners defence in front of goal, with Adrián Luna positioning himself unmarked in front of Mariners keeper, Mark Birighitti, off a cross from Craig Noone, scoring the night’s first goal.

The situation got worse in the 31st minute with a goal for McLaren, capitalising on a brittle Mariners’ midfield, uncharacteristic so far this season, with a wayward pass setting up Florin Berenguer in an attacking position.

Centre back, Kye Rowles closed in on Berenguer, leaving Jamie Maclaren free to advance on a pass in front of goal and dink the ball over Birighitti into the net.

Maclaren is the only A-League player to have multiple hat-tricks logged against a single opponent – the Mariners – an ill omen not lost on the blue and yellow.

In dire straits, the Mariners lifted in front of their home crowd.

A chance came for Ruon Tongyik to score off a free kick cross from Marco Ureña.

The centre back towered over Curtis Good, meeting the ball with his head, but Glover got across and palmed it away.

For the Mariners, the break through came at the closing of the first half with an interchange of passes and a through ball from Urena that put Matt Simon into space.

The Mariners veteran showed his vision, threading a pass in between Scott Jamieson and Berenguer to Joshua Nisbet, leaving him with a simple touch in for his first goal of the season.

The late first half goal set up the home with better chances in the second, which they eagerly took early on to swing the flow of the game almost entirely in their favour.

Simon aggravated City’s Nathaniel Atkinson until the youngster rode him into the ground in the 57th minute.

Time stood still as the captain put the penalty away for his first goal of the season on his most momentous of days with the club, evening out the scores.

The Mariners’ style of play this season has favoured wide passing, and with an extra man over their opponents, the hosts tightened their control on the match.

Yet a winning goal still alluded them, all the way up to the 80th minute, when a fiery blast from De Silva outside of the box swung away from Glover and nestled itself in the back of the net.

When the final whistle blew, the Central Coast side swarmed their captain who, on his 200th game, had earned himself an assist and a goal.

The Mariners now have another quick turn around in the A-League, with their next game being against Western United FC at Central Coast Stadium, 6:10 pm on Sunday 7 February.