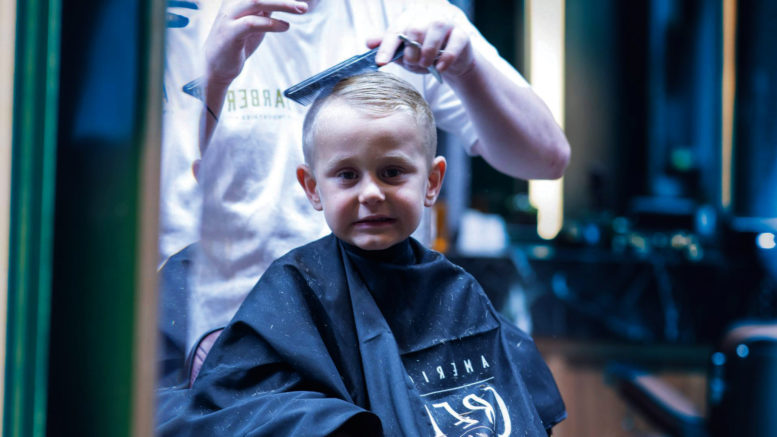 Around 180 boys have headed back to school in style, courtesy of Barber Industries at Westfield Tuggerah.

The new barber shop held a free back to school haircuts weekend for primary and high school aged boys over the weekend of January 30-31, with families turning out in droves to take advantage of the offer.

Barber Industries General Manager, Michael Wehbi, said eight barbers were cutting non-stop over the two days with dozens of students now sporting a fresh cut for their first day back to school.

“It was such a great day and I honestly lost count of how many haircuts we did.

“To keep it fair we didn’t take bookings and kept it first come first serve and the interest was just massive.

“We had people queuing out the door and we just tried to service as many people as we could,” Wehbi said.

To keep the mood light, the barbershop also offered free drinks, chocolates and lollies, which kept even the fussiest of kids happy in the barber chair and in the queue.

The day also had a charitable component, with Barber Industries partnering with Central Coast Kids in Need (CCKIN) to raise funds for the charity that supports the families of seriously ill children on the Coast.

“The ladies at CCKIN are so passionate about what they do that we were happy to support them.

“We’re still waiting for them to confirm how much the donation box we set up raised, but we hope it’ll help them keep doing what they do,” Wehbi said.

With the weekend now done and dusted, Wehbi said Barber Industries hadn’t ruled out running a similar event later down the track.

“We actually opened at Tuggerah two months ago and had a lot of things planned to engage with the community and celebrate our opening that couldn’t go ahead because of Covid restrictions, but with things easing up we’d definitely consider making the back to school weekend a regular thing,” Wehbi said.

“We did a similar thing at our Kotara store where we had it setup out in the centre and had musicians and soccer players and a few other things happening throughout the day.

“We’d like to do that style of event at Tuggerah too when circumstances allow,” Wehbi said.

We Care Connect helps kids get back to school

Kids back at school, but need to mask up on public transport

COVID restrictions eased for back to school activities