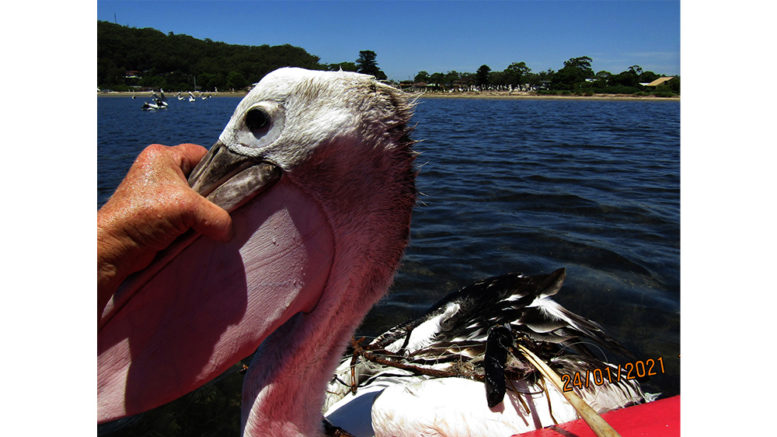 The Peninsula’s ‘Pelican Lady’ is calling on residents to dispose of their fishing equipment and rubbish appropriately after five pelicans were recently found trapped.

Locals are being asked to not use braided line inshore or unnecessarily, and to cut it up and dispose of it appropriately.

The Pelican Post has been reporting on Wendy Gillespie’s findings since its first edition in November, calling on the community to keep an eye out for the endangered birds.

Gillespie said she has rescued five pelicans since Christmas Eve, with wing entanglement from fishing lines having a significant impact on the birds.

A five-month-old pelican was found trapped in its nest with a mass of fishing line wrapped around its wing.

Gillespie said she found four separate lines, an old bait jig with hooks, disintegrated tarp strands, and a balloon and twine attached to the wing, before she cut it off and released the bird immediately.

However, she said not all cases are this lucky.

“Many of the seagulls and doves with lower limb amputations have been victims of ‘braided line’ entanglements,” Gillespie said.

“The line construction ensures that once it becomes entangled it can’t be disentangled so it’s often cut off and discarded in a ball.

“The ‘braided’ line literally saws through wings and limbs on movement.

“The slow and painful plight of our birds and other wildlife entangled in this diabolical fibre and other line and twine is the primary reason why I continue to proactively rescue 23 years on.”

Gillespie said although birds who are entangled can still fly, this is no reason for them not to be rescued.

She is asking for locals to report birds in distress so suffering, dysfunction and limb loss can be prevented.