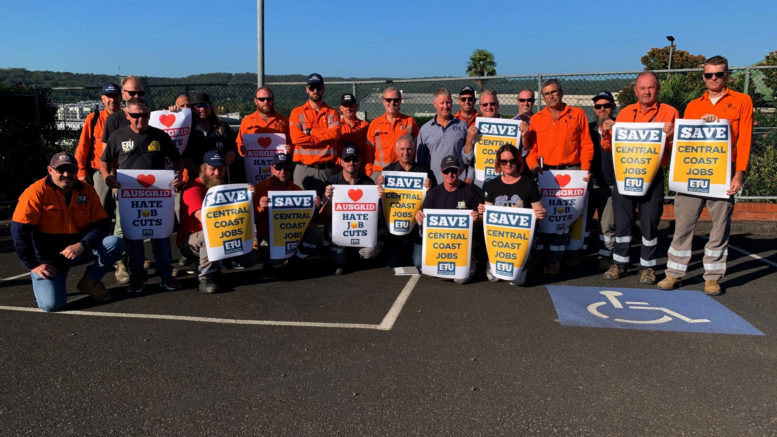 They say the electricity company has axed more than 200 positions in the region since 2014, leaving fewer than 100 people employed at the sole remaining regional depot at Ourimbah.

ETU NSW & ACT Secretary, Justin Page, slammed Ausgrid’s announcement before Christmas that the company intends to cut a further 500 positions state-wide by 2022, bringing the total number of job losses since 2015 to 2,500.

“The massive decline in staffing has seen increased blackouts and longer waits for power to be restored,” Page said.

“More than 1,800 Central Coast households lost power on the morning of Tuesday, February 9, leaving families struggling to get to school and work.”

Page said job security is the core issue in enterprise bargaining negotiations currently underway between Ausgrid and the ETU, which represents more than 1,700 employees at the power company.

He said an ETU survey had found more than 80 per cent of Ausgrid workers are prepared to take industrial action to protect jobs, with job cuts leaving the company unable to restore power to customers for weeks or months.

“These savage job cuts have had a severe impact on the workers affected and their families, with many suffering financial and mental health hardship,” he said.

“Communities across the Central Coast have also been hit hard, especially in the summer of 2019/20, when extreme weather destroyed swathes of the local electricity network, leaving many homes without power.

“Due to years of deep job cuts, Ausgrid was unable to deal with the crisis and had to call in power workers from Energex in Queensland and from other NSW companies to restore power and rebuild the Central Coast network.

“That experience should have been the wake-up call the company needed to change course but unfortunately Ausgrid plans to axe 500 more jobs state-wide, on top of 2,000 already cut since 2015.

“This is gross mismanagement of an essential service.”

Page said the ETU would continue to fight for members in ongoing enterprise bargaining negotiations.

Central Coast News approached Ausgrid for comment but was unable to obtain a response prior to deadline.

Casuarina Grove to be taken over by a private provider