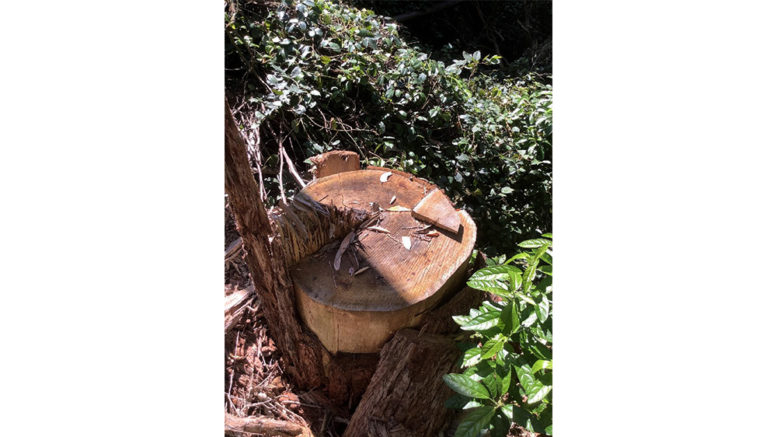 One of the trees felled

The NSW Environment Protection Authority (EPA) has fined Forestry Corporation of NSW (FCNSW) for allegedly failing to mark a protected zone during a logging operation at Olney State Forest.

EPA officers identified the alleged licence breach while inspecting a timber harvest site in the forest.

Olney State Forest, which is west of Lake Macquarie in the Watagan Mountains, is a popular visitor area for its walking trails, swimming in creeks and rock pools, camping, picnics and its natural rainforest vegetation, but also, the forest has been harvested for timber for more than 100 years.

The forests seen there today are regrowth forests, having been harvested for timber many times over and grown back.

Between January 2019 and March 2020, the FCNSW logged a compartment of forest where, in a post-harvest inspection, the EPA found that FCNSW had failed to mark a riparian exclusion zone boundary.

This was contrary to the requirements of the Integrated Forestry Operations Approval held by FCNSW.

“Riparian zones are environmentally sensitive areas which must be marked prior to an operation commencing so that they are identifiable and protected from logging operations,” Dwyer said.

“These zones are vital to protect our waterways, animal habitat and forest biodiversity.

The alleged failure to mark the exclusion zone resulted in three mature trees being felled and 2,300sqm of riparian vegetation removed to create a snig transport track.

Surrounding vegetation in the area was also disturbed during the logging.

“The EPA actively monitors forestry operations at all stages of logging operations – pre, post and during harvesting,” she said.

“As the state’s environmental regulator, we are focussed on ensuring that forestry operations adhere to the standards required and will not hesitate to take action if breaches are identified.”

Penalty notices are one of a number of tools the EPA can use to achieve environmental compliance including formal warnings, official cautions, licence conditions, notices and directions, and prosecutions.